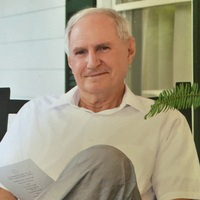 Hattiesburg – Norman Goetzmann Stevens, Jr., of Mount Olive, Mississippi, 90, fully entered the presence of his Savior on April 24, 2022. He was born June 11, 1931, in Picayune, Mississippi to Norman Goetzmann Stevens, Sr. and Fern Anderson Stevens, loving parents who laid a fine foundation for a remarkable life. He grew up in Picayune and spoke fondly of his days there as a child, including riding with the engineer in the Crosby steam engine as it carried logs between the mill and the mill pond, untold hours at the YMCA (where he was when news of Pearl Harbor came), and fishing on the Hobolochitto with his Dad. He became a gifted athlete at Picayune High School in multiple sports, leading the football team to a state championship in 1948. He was a highly recruited quarterback. Like his father before him (LSU’s last four sport letterman) he became a Bengal Tiger, one of the few father son combos in LSU football history. He played the seasons of 1950-1953 and was named the MVP his senior season. There “The Arm” met his beloved future bride Martha Sue “Mossy” Blain, a cheerleader who rode atop the tiger cage into Tiger Stadium for each home game. They married December 20, 1952. Upon graduation he took a position with a Picayune bank but soon received a draft notice. The USAF assigned him to Keesler Air Force Base, where the base commander wanted him to coach and play for the base football team. While there he was promoted to First Lieutenant and was ultimately, as a 24-year-old, in command of over 600 men training as radar operators. After his Air Force tour, he joined his father in law’s company, Blain Construction Company of Mount Olive, Mississippi. Norman helped build an outstanding company that endured well into a third generation. He had a decades long career in the highway construction and materials business and was a part of building many of the major highways and interstates across Mississippi and bordering states. He was well respected by his peers, known for his honest dealings and forward-thinking practices, and served in leadership positions on many industry boards on a state and national basis, as well as numerous local civic and philanthropic boards. In one of the defining moments of his life, as a young (33) father of three children he suddenly lost his beloved Martha Sue in 1965. By the grace of God, he weathered this heartache, and married the second love of his life, Elizabeth “Beth” Wagner on January 11, 1969, thereby becoming father to two more beloved children. There has never been a more complete melding of two families into one. In a second defining moment, Beth was diagnosed with advanced ovarian cancer in August 2000. He immediately retired from his work and devoted the next ten years to walking side by side with her through a long and arduous chemotherapy journey. They were married for 42 years, and he loved her fiercely till the end. Norman was a devout follower of Jesus. For decades he daily rose before the sun to extensively study his Bible and pray. He left behind volumes of daily study notes and, more importantly, he left an example of loving and living in harmony with his fellow man. He served as presiding elder for Mount Olive Presbyterian Church and dearly loved his church family and pastors. His legacy of faith is plainly revealed by the faith of his children, grandchildren, and great grandchildren, and by the steadfast way in which he lived his life in moments of testing. He was quite a man and will be sorely missed by those who loved him. To God be the glory. The family expresses its appreciation to Mollie Rigsby, enduring family friend of over sixty years, to the staff of The Claiborne for their kind assistance since Norman had to leave his home, and to the sitters from First Light Home Care and Solace Hospice helpers who kept him comfortable in his final days. As noted, he was preceded in death by two wonderful loving wives, who he often said he longed to join in heaven – and he has. He will be laid to rest between them. He is survived by his sister Suzanne “Suzie” Stevens Redd of Charleston, South Carolina, daughter Susan Stevens Shuler and husband Conrad of Six Mile, South Carolina (Conrad, Stevens, and Annie Kate); son, Norman Goetzmann Stevens, III, and wife Joy of Jackson, Alabama (Sarah, Jenny, and Will); daughter Martha Stevens McIntosh and husband Mark of Peachtree Corners, Georgia (John Mark, Mamie, and Lizzie); daughter and faithful caregiver Kevin Stevens Lowrey along with husband and primary caregiver Perrin of Hattiesburg, Mississippi (John Madison, Justice, Brittny, Erin, and Emelie); son Robert Lee Stevens and wife Eva of Crystal Springs, Mississippi (Jed, Ben, and Sam). He is also survived by 21 great grandchildren (including two in utero), and numerous nieces and nephews, great nieces and nephews, and cousins. The pallbearers will be Norman’s eight grandsons. Visitation will be held at Mount Olive Presbyterian Church on Saturday, April 30, 2022, from 10:00 AM to 11:00 AM. The memorial service will begin at 11:00 AM. The burial service will follow at Mount Olive Cemetery. Memorial gifts may be sent to the Mount Olive Presbyterian Church. Colonial Funeral Home is in charge of arrangements at (601) 765-1010.