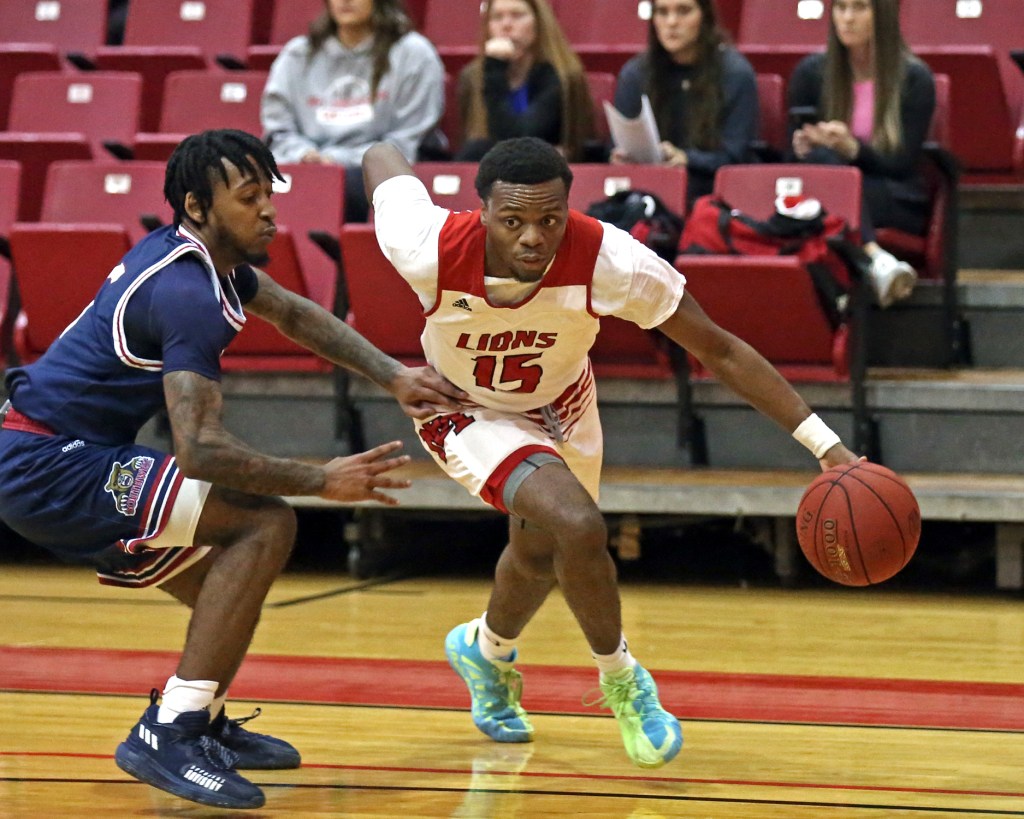 In a battle of nationally ranked conference foes, the visiting Lions never trailed at Jones after putting together a hot-shooting first half. While making 55 percent (16-of-29 FGs) of their shots from the field and limiting the Bobcats to just 24 percent (9-of-37 FGs) field goal shooting during the opening 20 minutes of action, EMCC went on a 15-1 run capped by 12 unanswered points to move ahead, 31-14, with five minutes remaining in the half.

The Lions maintained their 17-point advantage by heading to the locker room with a 43-26 halftime lead.

Following intermission, the visitors extended the margin to 25 points (59-34) by the 12:33 mark of the second half following back-to-back three-pointers by Jakorie Smith. EMCC continued to preserve a 20-point cushion (69-49) with less than six minutes left to play in regulation.

Aided by seven straight EMCC empty possessions, including five turnovers, during a three-minute stretch, the Bobcats scored 16 unanswered points to cut the deficit to four points (69-65) by the 2:30 mark. Calvin Temple and Lovell Smith had eight and four points, respectively, to combine for 12 of Jones’ 16 points during that span.

After an EMCC timeout, the Lions regrouped to fend off any chance of a possible Jones comeback. Kevin Henry capped a career-high, 14-point effort by scoring five straight points within the game’s final minute to put the visitors back on top by nine (76-67) with 27 seconds left. A pair of late treys by Jones’ Ashton Campbell made things interesting down the stretch to account for the final margin.

With their first in-season, top-10 national ranking since owning a No. 8 rating during the early portion of the 2012-13 campaign, the Lions’ current nine-game winning string matches their nine-game win streak that resulted in claiming the 2018-19 MACCC tournament championship for EMCC’s first conference title in men’s basketball since the 1930s.

Improving to 12-2 overall and 5-0 within the MACCC, head coach Billy Begley’s EMCC Lions had four players score in double figures against Jones. Blake Butler led the way with 16 points, followed by Henry and Danny Washington with 14 points apiece. Coming off a career-high, 32-point performance (25 in the second half) during Saturday’s 85-76 win at Copiah-Lincoln, Smith registered his 16th career double-double (fourth this season) with 11 points and 10 rebounds versus the Bobcats. Nick Walker added eight points and nine boards for the winners.

Falling to 11-3 overall and 3-3 in conference play, the Jones men were paced by Campbell’s game-high 27 points. Temple followed with 13 points, while Smith and Caleb McGill added 11 points each for the Bobcats.

In women’s action played on the Scooba campus, the Lady Bobcats scored the game’s first eight points on the way to jumping out to a 23-7 lead after the opening quarter of play.

After the visitors lengthened their lead to 22 points (35-13) midway through the second quarter, EMCC cut the deficit to 13 points (36-23) late in the half after scoring eight unanswered points. Jones scored the final basket of the half to take a 38-23 halftime lead to the locker room.

The Lady Bobcats maintained their double-digit advantage for the remainder of the contest, owning a 55-34 lead after the third quarter on the way to the 22-point road triumph.

Head coach Sharon Thompson’s EMCC Lady Lions, now 6-7 overall and 3-2 in the MACCC, were led by Siarra Jackson with 14 points on 6-of-9 shooting from the field. Markiema Lancaster came off the EMCC bench to record her first collegiate double-double with 11 points and 10 rebounds.

Improving to 10-2 overall and 5-0 within the MACCC, the Jones women were powered by Sakyia White’s game-high 20 points on 9-of-12 shooting from the field. She also contributed nine rebounds and three blocks. Meloney Thames and Jordan Clark followed with 16 and 11 points, respectively, for the winners on a combined 7-of-10 accuracy from three-point range.

The East Mississippi basketball teams are scheduled to continue MACCC play Thursday evening (Jan. 20) against Mississippi Delta, with the No. 9 EMCC Lions playing host to the Trojans in Scooba and the Lady Lions traveling to Moorhead in women’s action. Both contests are slated to tip off at 6 p.m.