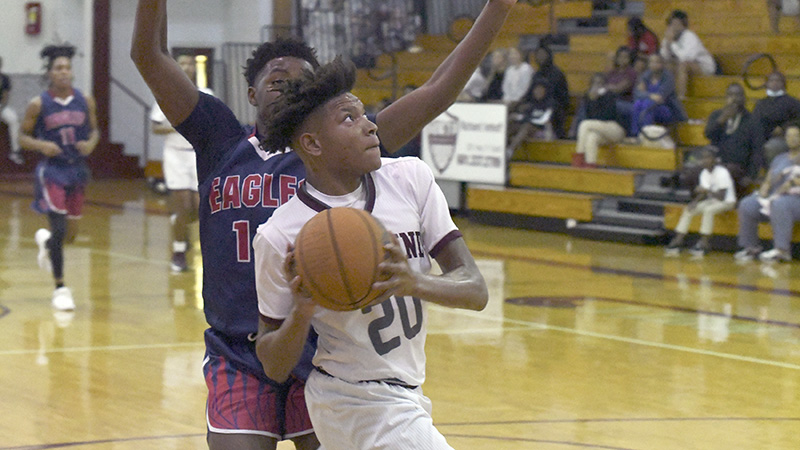 The Picayune Maroon Tide fought back from a double-digit deficit in the second half to beat the Yazoo City Indians 45-44 in the 2021 Adidas Holiday Classic, on Dec. 30.

Boys basketball Head Coach Eric Vianney thought his team started the game off well and handled the Indians matchup effectively even though they had limited time to prepare.

As the game reached the second quarter, the Maroon Tide players got tentative and committed turnovers when the Indians adjusted the defense and extended to a full court press. The struggles for the Maroon Tide continued to carry over to the third quarter.

“We were up by about 11 points… then we found ourselves down by the same,” said Vianney.

In the fourth quarter, the Maroon Tide found a way to push through. The team has been in tight fourth quarter games throughout the tournament, so Vianney challenged his players to respond in crunch time. Picayune managed to cut Yazoo City lead down to two points with three minutes to play.

Vianney then called a timeout with five seconds left and drew up a play to potentially take the lead. Junior Josh Holmes stepped up for the Maroon Tide and hit a buzzer beating three to win the game 45-44.

“They enjoyed that moment,” said Vianney.

“It was a good come back, because we started well, but we didn’t manage ourselves in the stretch of the second, third and fourth quarters and somehow we found a way to come back and make it happen… they found a way and responded.”

The Maroon Tide finished the tournament in third place with a 2-1 record. Holmes finished with 13 points including the game winning shot, junior Troy Carter had 15 points and senior Isaac Brice finished with 14 points.

The Maroon Tide moves to 9-7 on the season. Next will be district play. The first game will be at home against the Pearl River Central Blue Devils (10-6). Tip off is set for 7:30 on Friday, Jan. 7.

MSU Falls at No. 1 South Carolina to Open…