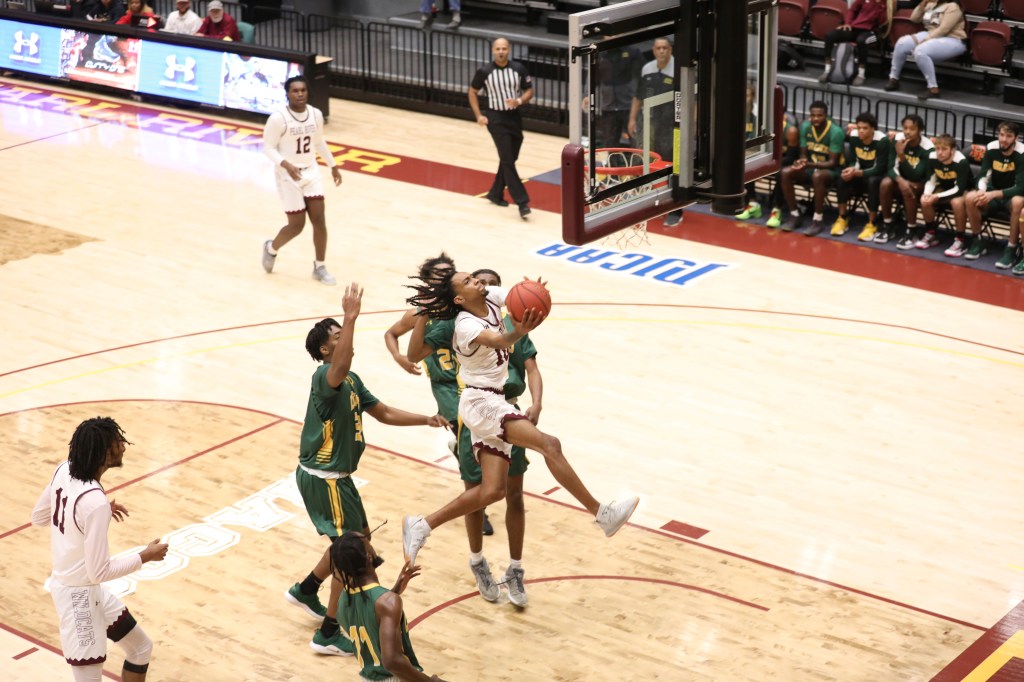 POPLARVILLE, Miss. — The Pearl River men’s basketball team made big plays when it needed to down the stretch Monday to defeat Hinds 66-57 inside Marvin R. White Coliseum.

With the victory, PRCC improved to 21-2 over Hinds in their last 23 meetings dating back to 2011.

The Wildcats enter winter break 7-2 overall, 2-0 in the MACCC and winners of three straight.

“One thing I’ve been proud of is we have had the same fight in each and every game,” PRCC coach Chris Oney said, detailing moments from all nine of the Wildcats’ games to date. “It’s easy to improve on the things you need to improve on if the guys will continue to fight each and every night.”

BACK AND FORTH
The Wildcats and Bulldogs never had much breathing room, with each team making runs until late when PRCC was able to build a slight lead.

Tied 4-4 early, Carlous Williams (Hattiesburg; Harrison Central) scored in the paint and then drilled a 3-pointer to push PRCC’s lead to 9-4. The Bulldogs (5-5 overall) came out of an early timeout on a 13-6 run to pull ahead 19-17.

The Wildcats immediately responded. Freshman Dylan Brumfield (Hattiesburg; Oak Grove) drove down the lane and lofted the ball up and through the cylinder for two to tie the game 19-19. Brumfield knocked down the next shot to push PRCC ahead 21-20. Following a free throw from Hinds, Cameron Brown (Hattiesburg) caught a pass from Brumfield and nailed his first of three 3-pointers on the night for the 24-22 lead.

The two sides traded points down the stretch, but transfer Brison Waller (Cleveland, Ohio; Garfield Heights) jumped over his defender to tip in a miss at the buzzer to give PRCC a 29-26 advantage at the midway point.

SECOND HALF
Hinds hit a 3 to open the second half and jumped out to an early 33-31 lead. However that was the visitor’s last lead of the night.

Brown and Earl Smith (Jackson; Lanier) sandwiched 3-pointers around a timeout and then Williams hit a long jumper to extend PRCC’s lead to 39-33.

Following two baskets from Hinds, PRCC turned defense into offense with a huge hustle play. Following a Wildcat miss it looked like Hinds was going to get an easy bucket at the other end. Brumfield hustled back to get in the way of a layup, JaRonn Wilkens (Biloxi) pulled in one of his six rebounds on the night and then the Wildcats flipped the court, scoring on a Brown basket to lead 41-37 with 13:36 remaining in the contest.

Hinds pulled within two, 43-41, but another hustle play saw PRCC jump back ahead 45-41. After Smith and Brown fought to keep the possession alive, Jariyon Wilkens (Biloxi) found enough real estate under the basket to convert a layup.

Leading 51-49, the Wildcats scored six straight to provide a little breathing room down the stretch. After Brown hit two free throws following a technical being called on the visitors, Williams scored and then JaRonn Wilkens found Brown alone for a 3-pointer and a 58-49 lead.

Hinds ramped up the press late to try and get back into the contest but the Wildcats broke free as Jariyon Wilkens converted a fastbreak layup off of a pass from Williams.

Brown threw down a dunk on the following possession to extend PRCC’s lead to 62-55 and the Wildcats scored the game’s final four points to seal the victory.

LEADING THE WAY
Brown had a breakout performance for PRCC, scoring a season-high 19 points. His night was punctuated by a 6-for-6 showing from the free throw line. He also added eight rebounds.

“He’s been consistent since Day 1,” Oney said. “There hasn’t been a game since he’s been here that he hasn’t been able to find some kind of way to help us. Tonight he was able to knock some shots down to get us over the hump.”

“We knew once he got into shape and figured out the speed of the game he’d be capable of doing some good things for us,” Oney said. “It’s good to see it come into fruition at the right time when we have needed him the most.”

“At halftime I got onto him a little bit because I thought he was giving their defense too much credit. This year every time he gets the ball it’s like he’s seeing a double team,” Oney said. “He thought he was going to see another one tonight so he gave up a few opportunities in the first half because he thought the double team was coming. I told him to just play and we’ll adjust off of what they do. When you get the ball, you go.”

“Tonight he flew around, did a good job limiting No. 4 to four points,” he said. “When he locks on someone like that it’s hard it’s hard for them to hit their average.”

NEXT UP
The Wildcats won’t return to game action until Jan. 6 when they travel to Fulton to play Itawamba. PRCC’s next home game is Jan. 10 against Meridian at 6 p.m.