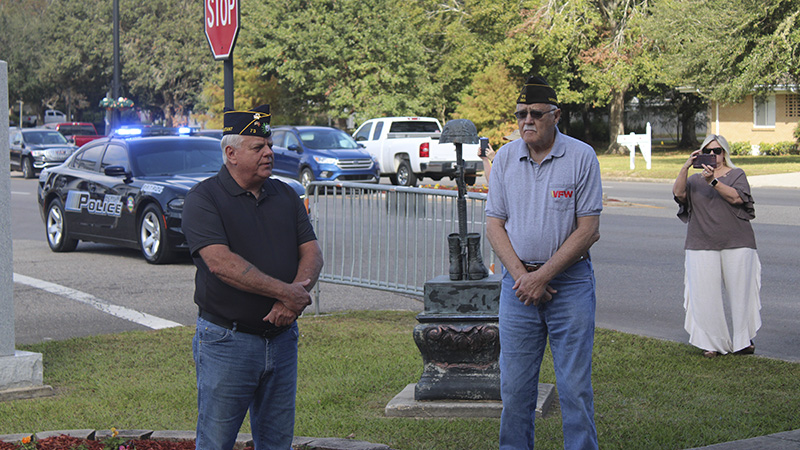 The community of Picayune came together on Nov. 11 to honor local veterans during Veterans Day with a wreath laying ceremony.

Members of the City Council, Mayor Jim Luke, the Picayune Memorial High School band and countless veterans were in attendance for the event.

After the opening ceremony and a performance of the national anthem by the band, Luke said a few words to the attendees.

“I’m honored to stand here as your Mayor, and I want to give my heart felt thanks to everyone of you here who has served to protect our country,” said Luke.

Ronnie Stogner of VFW Post 3804 served in the Marine Corps from 1967-71 and served two years in Vietnam. Stogner and other members of the local VFW post hosted the ceremony.

“It’s a special day to honor all the veterans especially for the VFW, and MIA soldiers who never found their way back home,” said Stogner.

Picayune resident and VFW member Allen Callumary served in the Air Force from 1968-72 and toured in Thailand during Vietnam.

“We want to honor the veterans who gave their lives to defend our country,” said Callumary.

At Jack Read Park later that day, about 80 veterans were provided burgers, chips, drinks and goodie bags by members of the Exchange Club of Picayune.

Exchange Club member Charles Rogers said, “We’re here to give complementary food to our veterans, we really just want to give thanks because here especially in Pearl River County, we understand the importance of freedom and we won’t take that for granted.”

“It’s something small but they (veterans) paid a big price for us, and this is the least we can do,” said Rogers.

Krista Burge, who also volunteered during the event, said, “we wanted to honor them for what they did for us and we appreciate everything they’ve done, so we want to give back with a little something.”

Later that same day at 6 p.m. a Veterans Day Parade was held along Goodyear Boulevard.