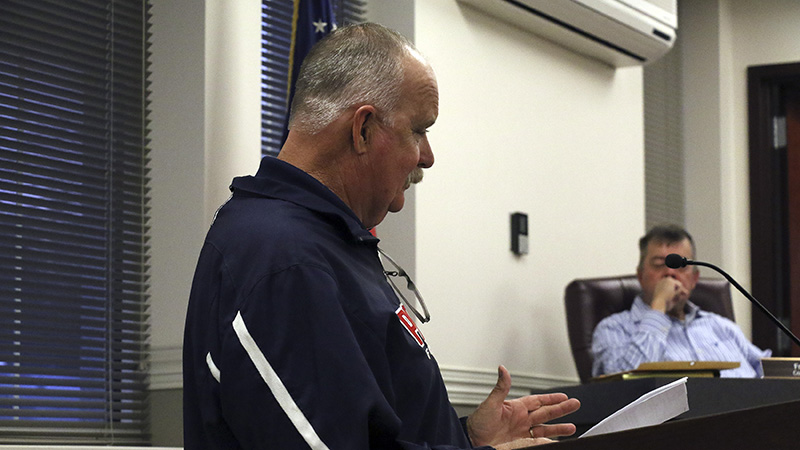 Picayune Fire Chief Pat Weaver informs the City Council that his department has responded to 36 calls for service since hte last Council meeting, and five of his staff are currently in training. Photo by Jeremy Pittari

Changes to how flood insurance rates could be forthcoming in Pearl River County.

During Tuesday’s Picayune City Council meeting, Code Enforcement Officer Tom Milar said he sent some of his staff to a seminar where they will learn about changes to the flood insurance rates.

While nothing is set in stone, changes have already been implemented along other coastal counties and soon a local committee will be formed and the entire county will be involved.

Not all of the details are currently available but Milar said that changes are expected to be made to the existing flood zone maps and some of the changes will be based on the number of flood events and claims.

Parks and Recreation Director Trevor Adam said his staff are gearing up for repair work that will take place to repair roof and siding damage to some park facilities due to Hurricane Ida. Also, bids for the construction of new restrooms at Friendship Park and Leola Jordan Park will be opened on Dec. 1.

Work to construct the new playground at Friendship Park is showing visible signs of progression with the installation of a fence by the company that won the bid, Planet Recess.

In other business the Council approved a motion to accept a donation of $180 in memory of Bob Ford to help fund the playground’s construction.