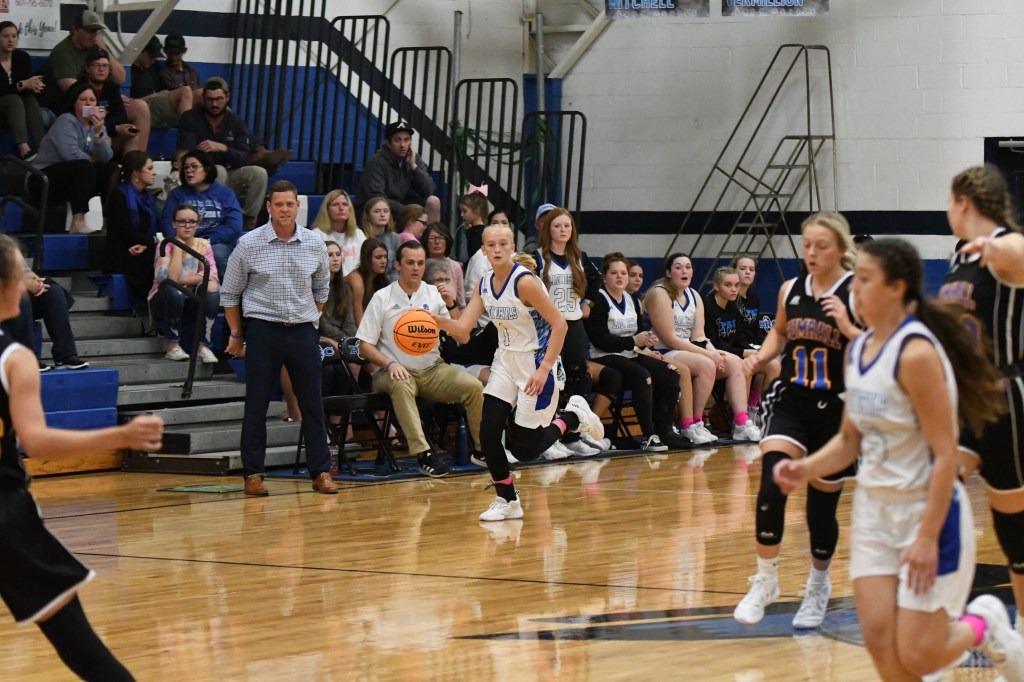 The Pearl River Central Blue Devils (1-1) couldn’t match the Sumrall Bobcats (1-3) during Tuesday night’s game that resulted in a 57-30 loss for PRC.

“After tonight we need to improve on everything,” said girls Head Basketball Coach Cliff Bauer.

Due to the Blue Devils losing a key player from the roster and another absent for personal reasons, Bauer had to utilize his freshmen players Tuesday night.

That fact left the Blue Devils low on experienced players.

“With the experience we have now, we got a lot to learn,” Bauer said.

To start the game, the Bobcats scored 11 unanswered points before the Blue Devils finally answered back when Hannah Mitchell hit a pull up jumper for two. The Blue Devils found some light after Michell’s bucket and the full court press began. Sumrall got flustered over the press and the Blue Devils capitalized with back-to-back buckets with help from Emily Carroll’s fast break layup and offensive put back. The deficit for the Blue Devils was 12-6 at the end of the first quarter.

PRC’s Hannah Mitchell hit a walk up three at the top of the key to open the second quarter. The next buckets for the Blue Devils occurred three minutes in when Carroll hit a wing three, and soon after Danica Vermillion made an assisting pass to Mitchell for a fast break layup, resulting in a 19-14 score. The Blue Devils tried to inch closer to the Bobcats but Sumrall made another run, scoring four straight points. With two minutes until the break, the Bobcats led by nine, 23-14.

On the other end, Carroll converted a layup and drew the foul, but missed the extra free throw. During the next Blue Devils possession, Mitchell was fouled with 11 seconds left and a chance at two free throws but came up short on both.

The Blue Devils headed to the lockers down 27-16 at the half.

Sumrall left their paws all over the third quarter by going on a 17-3 run. The Blue Devils couldn’t find any rhythm but s Mitchell was able to score in the quarter, hitting her second three pointer on the night. At the end of the third, the Bobcats led 44-20.

In the fourth quarter the Blue Devils played more aggressive. Mitchell got to the line after converting for two but missed her extra free throw. With five minutes left in the final quarter, the Bobcats called a timeout with a 50-22 lead. The Blue Devils continued an aggressive play tactic and attacked the rim, earning a trip into the bonus and with the chance to decrease the deficit, but Carroll missed the 1 and 1 free throw so the score remained at 50-22.

With less than three minutes in the quarter, both teams traded buckets, and on a high note the Blue Devils finished the game on an 8-7 run over the Bobcats.

After the game, Bauer said, “It’s a long season, it’s a roller coaster with ups and downs, and we want to peak at the end. I told them, losing and winning just is part of it. I thought our effort was good, also thought our lack of skill cost us tonight.”

Next for the Blue Devils will be an at-home again against Our Lady Academy’s Crescents (0-2), this Thursday, Nov. 11 at 6 p.m.