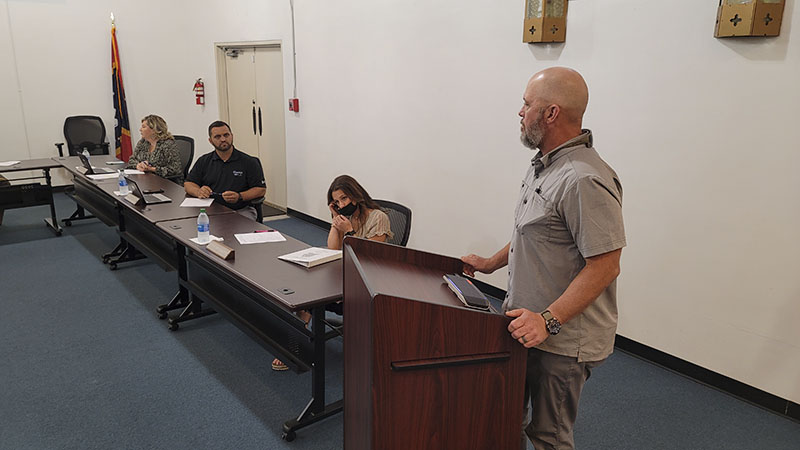 Derrick Tynes speaks to the Pearl River County School District's Board of Trustees to urge them to allow teachers who hold an enhanced concealed carry permit to bring firearms on campus so they can respond to emergency situations. Photo by Jeremy Pittari

After some deliberation about the district’s reopening policy, Board member Jerry Frazier expressed concern about loosening the mask policy, reminding the Board what happened at the beginning of the school year when mask use was only recommended and a rise in cases caused the Board to have to close all schools for two weeks.

Since that time, cases have decreased within the district and the state, so a majority vote from the Board, with only Frazier voting against, led to the policy being updated.

Now, face masks are recommended for use on school buses and while on campus. Additionally, all students will now eat in the cafeteria at their respective campuses starting Nov. 1 and the deadline for virtual learning has been reestablished.

Food Service Director Stacey Amacker said that going back to having students in the cafeterias will reduce waste since prepackaged meals served to students during the pandemic came with food items many children did not want, such as tomatoes, mayonnaise or other items, Amacker said.

In relation to the District’s stance on allowing staff and teachers who have an enhanced concealed carry permit to bring firearms on campus, several points of view were shared before the Board ultimately decided in a 3-2 vote to not allow it, with Board President Elaine Voss, and Board members Christian Burge and Frazier voting to not allow the carrying of firearms on campuses, while Mark Herrin and Jeff Jones voted to allow them to carry the weapons.

Before the vote was held, several community members and staff within the district shared their opinions on the matter.

Col. Todd Ryder, the District’s NJROTC instructor, asked the Board to consider allowing those with the specialized training to carry a firearm if they choose. He gave an example of his time overseas during a deployment where some civilians were given weapons and were able to defend themselves.

Karen Boutwell said that the Constitution provides the right to bear arms, and wait times for first responders can sometimes take up to 45 minutes, so having someone right there could be beneficial. She suggested utilizing table top exercises to help train the staff on active shooter situations and also have the staff trained in CPR and stop the bleed skills.

Elizabeth Zeringue, a teacher at the Middle School, also supported allowing those with an enhanced concealed carry permit to have firearms on them while on campus.

She said that teachers do their best to not only provide instruction, but protection to the students while on campus.

Pearl River Central High School Principal Kimberly Alford opposed allowing teachers to carry a weapon. She said that an enhanced concealed carry permit does not provide ample training, which is typically an 8 hour class. However, school resource officers not only have to pass the 10 week police academy, but to be a school resource officer they have to undergo another five days of training about active shooter situations. A two day refresher course on that training has to be redone every three years.

When the Board made the motion to not allow teachers with the permit to carry a firearm on campus, there was discussion about the possibility of revisiting the matter in the future with the stipulation that those who carry a firearm undergo additional training.