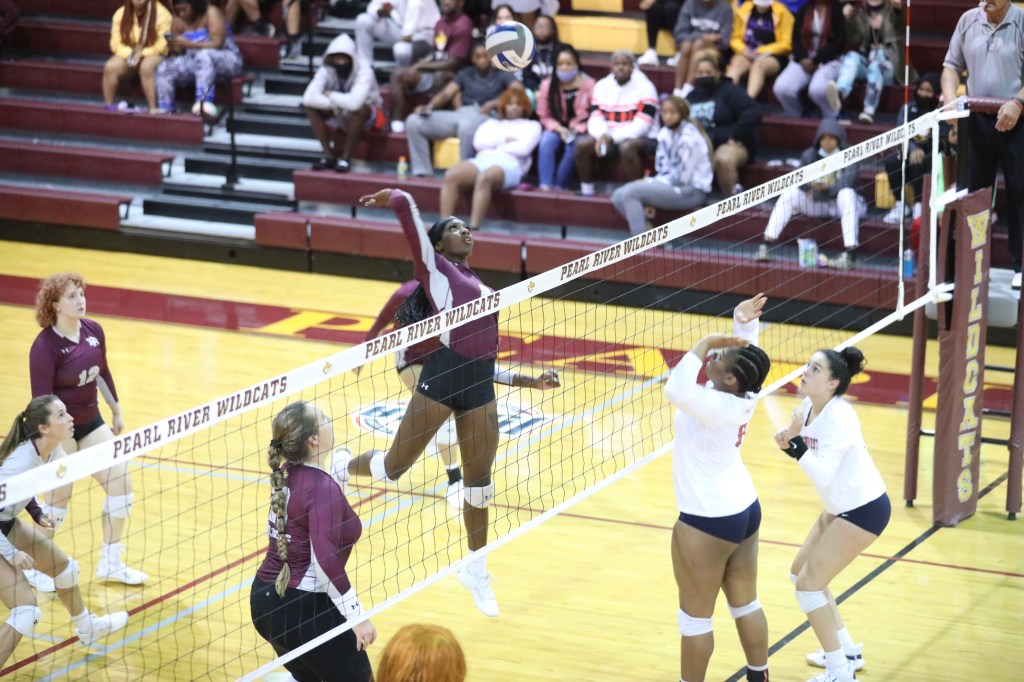 “We’re always happy with a conference win,” coach Haley Chatham said. “I saw profound leadership in players who took control of the situation whether we needed an immediate point or a directed refocus. Nothing makes me prouder.”

Pearl River (18-3 overall) was able to use a lot of its players between the matches.

“With such a quick turnover in this league, it’s so important to use all of our personnel any chance we get,” Chatham said. “They will be leaders on the floor in no time. Tonight, they were all able to turn chaos into a win.”

PEARL RIVER 2, CHAMPION CHRISTIAN 0.
Pearl River and Champion Christian (1-10) played an abbreviated match to start the day with the Wildcats controlling both sets from start to finish.

In the first set, the Wildcats jumped out to a 7-4 lead, but two straight points by the Tigers made the score 7-6.

After a pair of kills from Julianah Overstreet (Vancleave) and Jasmine Burdine (Biloxi), PRCC took a 9-6 lead.

CCC again cut the Wildcat advantage to one at 9-8 before Pearl River went on a 7-0 run that was capped off by a kill from Chloe Paske (St. Martin), making the score 16-8.

Champion Christian added a few more points before the Wildcats won the set 25-13 off a Payton McKerchie (Vancleave) kill.

Set two saw the Wildcats jump out to a 6-0 lead off of four consecutive service aces by Overstreet sandwiched between kills by McKerchie and Paske.

The teams battled out to a score of 14-13 before the Wildcats stretched their lead out to 21-16.

The Tigers added a point to make it 21-17 before PRCC claimed four in a row finished off by a Leighton Willoughby(Brandon; Northwest Rankin) kill and a combination block from Willoughby and Leah Draine (Mobile, Ala.; Mattie T. Blount), claiming the set 25-17.

PEARL RIVER 3, NORTHWEST 0.
The Wildcats built out a lead quickly in the first set against Northwest (13-15) going ahead 11-6.

After a few back-and-forth points, the Wildcats took a 13-9 lead before going on a 7-1 run shortly after that made the score 19-11.

Just a few points later, the Wildcats closed out the set 25-16.

Set two was one of the most back-and-forth sets of the season for the Wildcats, featuring 15 ties.

The first three points of the set went to PRCC before NWCC took the next three for a 3-3 score.

Pearl River looked like it had grabbed the momentum as it took four straight points, but the Rangers matched the scoring again to tie the set 7-7.

The Wildcats went behind for a moment at 14-13 before a Willoughby kill tied the match once again.

The last tie of the set came at 22 points each and the Wildcats followed up the tie by taking three straight points to close out the set 25-22.

The third set saw Northwest take a 6-5 lead before the Rangers and Wildcats found themselves in an 8-8 tie.

PRCC built out a 16-12 lead near the midway point of the set. The Wildcats went on a 4-1 run to end the set highlighted by a kill from Diamond Jones (Gonzales, La.; East Ascension) and a service ace from Amy Wright (Palm Bay, Fla.; Melbourne Central Catholic).

UP NEXT
Pearl River returns to action Friday as the Wildcats travel to Hanceville, Ala. to play in the Wallace State Tournament. PRCC is set to take on Snead State at 1 p.m. and Gadsden State at 5 p.m.

McCoy named Bulldog of the Week