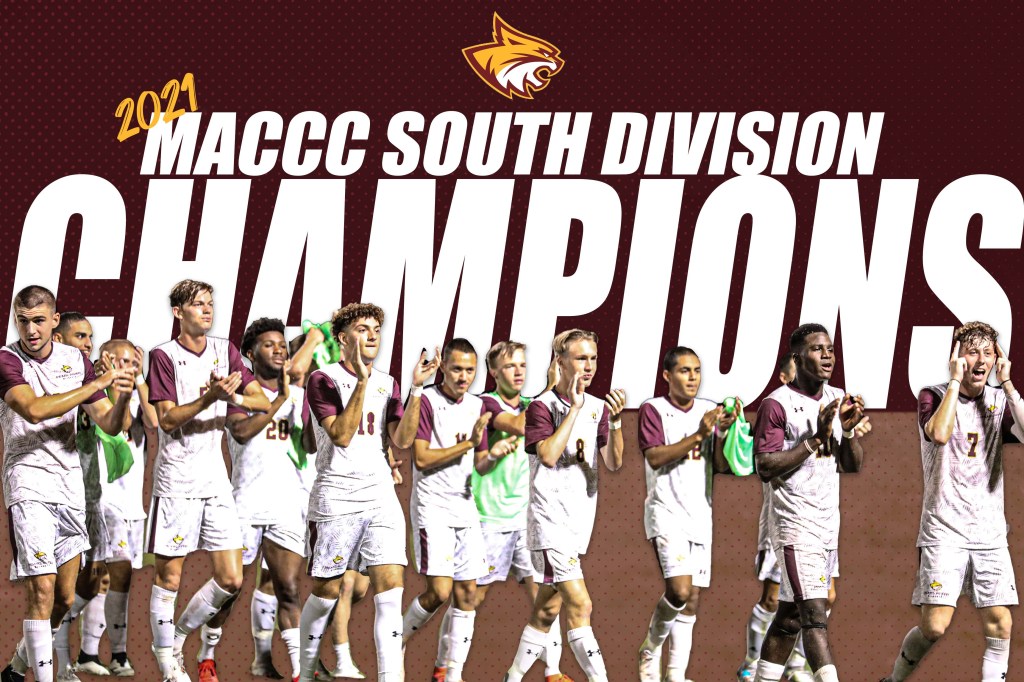 MERIDIAN, Miss. — The No. 3 Pearl River men’s soccer team has reeled in a number of accomplishments in the last few days, including a program-best ranking of No. 3. The team added another accomplishment Tuesday night, claiming the MACCC South Division title after defeating Meridian 2-0.
While claiming the South Division is a great thing, Pearl River head coach Drew Gallant is continuing to look ahead.
“It’s nice to have this recognition, but all that matters is the playoffs,” he said. “We know that we are in and that we’re going to get tough matchups no matter how the season plays out. The goals are set much higher than this.”
Meridian made it hard for the Wildcats to find the net for much of the night.
“Meridian is so organized,” Gallant said. “Their coach does such a good job of keeping them organized for the entire game. They gave us so many problems with that tonight.”
11 minutes into the match, Pearl River (10-0-1 overall; 8-0 MACCC South) nearly claimed its first goal of the night after Mohamed Diallo (Gulfport) sent a cross into the box. Alex Emery (Gulfport; West Harrison) tried to head the ball home, but his attempt sailed above the net.
Moments later the Wildcats had another great opportunity to score a goal, but couldn’t cash in. Peyton Ladner (Gulfport) took a shot, but the MCC keeper blocked and deflected the ball back out. The ball rolled to Ladner who then took a second shot that this time hit the side of the net and fell out of bounds for a goal kick.
Meridian (7-5-1; 2-5-1) immediately took the ball and pushed downfield trying to take the lead. A Wildcat defender pushed a ball out of bounds, allowing the Eagles to take a corner kick in the 21st minute.
Meridian played the ball into the box, but Maddux Francis (Poplarville) came out from goal to punch the ball away.
in the 31st minute, Ryley Smith (Manchester, England.; Castlebrook) took a shot from long range, but it sailed too far above the net.
The Wildcats finally got on the board in the 35th minute thanks to Emery. A Gavin Taylor (Gulfport) throw-in hit Emery in the chest who then smashed a ball home to give the Wildcats the lead.
Pearl River had a chance to double their advantage in the 40th minute but the Eagle keeper made a save to keep the score 1-0 heading into the half.
Nothing was happening for either team over the first 10 minutes of the second half of play, but in the 52nd Emery struck again. Emery, who was in at left back, dribbled up the sideline and made his way toward goal. He was met by several MCC defenders but dribbled his way around all of them before sliding the ball into the back of the net to make the score 2-0.
“To beat some players there and drive in and finish that goal was special,” Gallant said. “There just continues to be more and more positions that he’s been useful at for us. He can really do it all. He gets everything done for us and we’re just really happy with him.”
It looked as if the Wildcats were about to add a third goal in the 61st minute as Harper Baggett (Ocean Springs) broke through the Eagle back line and headed for goal all by himself. An Eagle defender caught up to Baggett and dragged him down just outside of the box, resulting in a Wildcat free kick.
Jamie Chamberlain (London, England.; Dover Athletic Academy) stepped up to take the set-piece and smashed a ball that clanked off the crossbar.
The Wildcats had a couple of more chances late but were unable to add a third.
MCC tried to get a goal back in the 83rd minute of the match, but Francis jumped high to snag a ball that was headed for the net.
The two goal lead was all that Pearl River needed as it held on to win the match 2-0.
UP NEXT
The Wildcats return home Friday to host Copiah-Lincoln at 7 p.m. The match will serve as Pearl River’s sophomore celebration and will be livestreamed at PRCCMedia.com/gold.
For the latest on Pearl River Community College athletics, follow us on Twitter (@PRCCAthletics) and Facebook (PRCCAthletics).