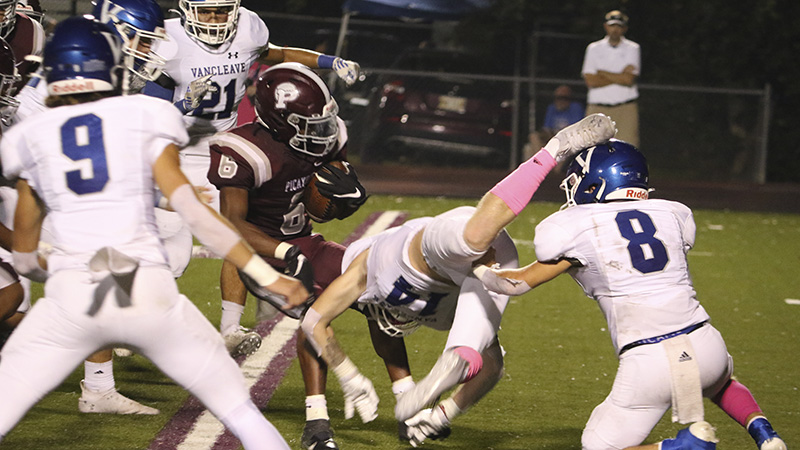 Chris Davis avoids a Vancleave defender while advancing the ball for the Maroon Tide during Picayune's 69-42 win over Vancleave. Photo by Jeremy Pittari

What started as a bit of a stumble for the Maroon Tide, turned into a high scoring game for Picayune Friday night against the Vancleave Bulldogs.

The Bulldogs started the game with an onside kick they recovered to take the first possession of the ball. Over the course of a 51 yard drive, Dayan Bilbo found pay dirt from the 20 yard line, giving the Bulldogs an early 7-0 lead with nine minutes left to play in the first quarter.

Nine plays later, the Maroon Tide found the end zone through a 58 yard drive that culminated in a two yard tote by Chris Davis.

Morgan Craft’s PAT tied the score at 7 with 4:59 left in the first.

The Bulldogs answered back through six plays covering more than 50 yards ending with a 6-yard-run by Bilbo. With Gavin Waltman’s PAT, the Bull dogs took the lead 14-7 with 3:07 left in the first.

In one play, the Tide tied the game again when Dawson Underwood completed a pass to Noah Carter for a touchdown. Morgan Craft’s pat tied the game at 14 with 2:48 left in the first.

After the bulldogs turned the ball over on downs, the Tide took possession of the ball on the bulldogs 8 due to a botched punt attempt. in the subsequent play from the 8, Darnell Smith ran the ball in for six points. Craft’s PAT gave the Tide a 21-14 lead with 1:26 left in the first.

The Bulldogs tied things back up in eight plays across 80 yards when Bilbo brought the ball to pay dirt from the two. Waltman’s PAT put the score at 21-21 with 8:23 left to play in the second.

The Tide took the lead back on the very next play when Dante Dowdell ran the ball down field from the Tide’s 43. With 8:09 left before the half, Craft’s PAT helped give the Tide a 28-21 lead.

After the Bulldogs gave up possession on downs, the Tide scored again on the very next play when Niquis Ratcliff ran the ball for about 80 yards to the end zone. Craft’s PAT gave the Tide a 35-21 lead with 5:45 left in the second.

The Tide got the ball back again on downs, and used the next play to find pay dirt again when Smith ran the ball from the Bulldog’s 26 yard line. With 4:06 left before the half, the Tide was up 42-21 with the PAT.

The rest of the game was end over end scoring touchdowns by both teams, but the Maroon Tide was able to stay ahead, ending the game with a commanding 69-42 lead.