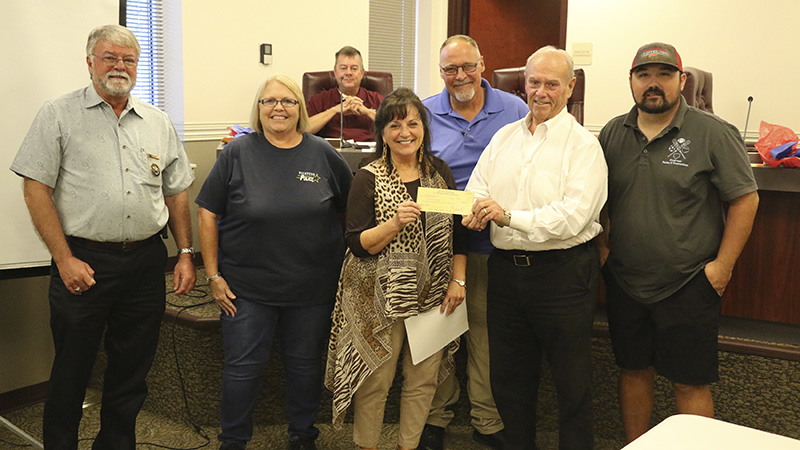 Members of the Save Our Park committee presented the city of Picayune with a check for more than $30,000 raised through fundraising efforts to help the city fund the required match to receive $1.9 million in BP grant funds. Those funds will be used to conduct renovations at Friendship Park. From left are Sheriff David Allison, Capt. Theresa MIlar, Reba Bebee, Code Enforcement Officer Tom Milar, City Manager Freddy Drennan and Parks and Recreation Director Trevor Adam. Photo by Jeremy Pittari

Members of Picayune’s City Council heard updates about debris removal after Hurricane Ida and a number of updates from department heads.

During Tuesday’s meeting, City Manager Freddy Drennan said crews are still in the process of removing debris left behind by Hurricane Ida, which means a second round of debris removal may be needed. Drennan said a decision on whether a second round is required will be determined at a later date, but asks all residents to put their storm debris by the road side as soon as possible so a proper assessment can be made.

Public Works Director Eric Morris said that 800 cubic yards of debris has been removed from the city, which was turned into wood chips and distributed throughout the city to be used as landscaping.

Morris also said that while construction debris removal  has been completed, he is in the process of evaluating whether a second pass will be needed for vegetative debris. He added that during his initial assessment, he came up with an estimate that 10,000 cubic yards would be put by the roadside. Now he estimates that total will be closer to 29,000 cubic yards.

Morris also said his crews finally caught up on grass cutting in the city by using overtime, and two property cleanups were conducted recently.

Within the Police Department, officers responded to more than 600 calls for service and made two felony arrests, said Police Chief Joe Quave.

Code Enforcement Officer Tom Milar said the city has collected more than $40,000 in various permits last month. He also gave the Council an update on the supermarket chain Aldi establishing a location in Picayune. He said that to his knowledge the company still plans to build a location here, but is currently working on land issues and constructing a distribution center in Mobile. Milar said the company plans to build about 36 stores across the region, but the distribution center is the first order of business.

At Crosby Commons, Morris said the installation of Wi-Fi at the park will be completed soon. Not only will wireless Internet access at the park benefit those who visit Crosby Commons, but will be useful for vendors holding events so they can take electronic forms of payment.

In other business, the city was presented with a check for more than $30,000 raised by the Save Our Park for use by the city as a match for a $1.9 million BP grant to conduct repairs at Friendship Park.