City changes from Coke to Pepsi 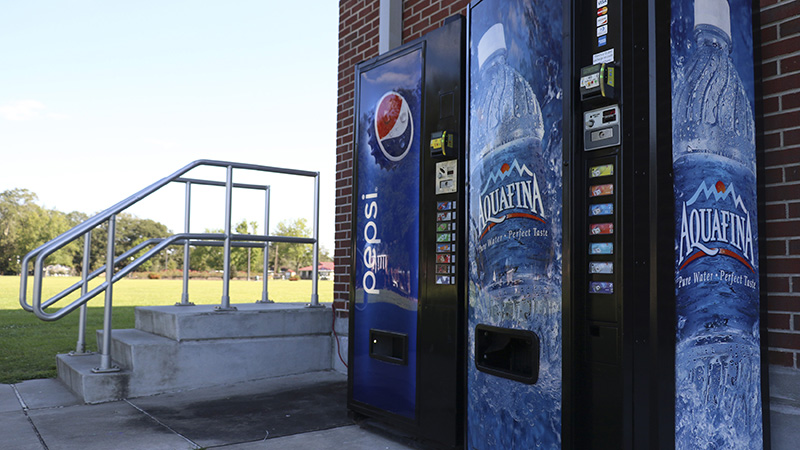 Vending machines have been added to several parks within Picayune as part of a new agreement with Allen Beverages. The new contract also includes more monetary benefits to the city when selling concessions at Friendship Park along with a $20,000 grant to the city to help with the required match in relation to a $1.9 million grant in BP funds that will be used to renovate Friendship Park. Photo by Jeremy Pittari

Picayune’s parks will now feature Pepsi products instead of Coke after a local distributor offered a better deal for items sold at concession stands.

During Tuesday’s meeting the Council was also presented with a contract with Allen Beverages to supply the concession stands at Friendship Park and install vending machines at various parks in the city. Parks and Recreation Director Trevor Adam said that the contract, which entails serving Pepsi products, was more advantageous than the one offered by Coka Cola, since Pepsi offered a 20 percent rebate over Coke’s 15 percent. The contract also included a cheaper case price over the competition in addition to the vending machines placed at Crosby Commons, J.P. Johnson and Leola Jordan Parks. A machine was also installed at the Intermodal Transportation Center.

Adam added that since Allen Beverages is located along the Mississippi Gulf Coast, problems can be addressed quickly.

The 10-year contract can be dissolved by either party, and includes other brands that can now be sold at the concession stands such as coffee and energy based drinks. Adam said the company also donated about $20,000 to help with the required match in relation to a $1.9 million in BP grant funds that will be used to renovate Friendship Park.

Adam also updated the Council about the formation of a maintenance contract between the city and Mississippi Power Company concerning lighting at Friendship Park. Adam said the process involves getting price comparisons so he can bring that information before the members of the Council for their consideration.

Economic Development Director Lindsay Ward, who is with the Pearl River County Economic Development District, informed the Council that since the last Council meeting, she has received interest from a restaurant and a light manufacturing company who are looking for locations. She said she is currently working with Code Enforcement Officer Tom Milar and City Manager Freddy Drennan on those matters, but did not provide further details.

The Council also approved a motion to accept a grant of $102,085 from the Lower Pearl River Valley Foundation that will be used by the city to construct restrooms at Leola Jordan Park and another set of restrooms at Friendship Park.

In a separate matter, Mayor Jim Luke asked Drennan to work with Dungan Engineering to look into a situation where the area of Quince Street and West Canal floods during heavy rains.