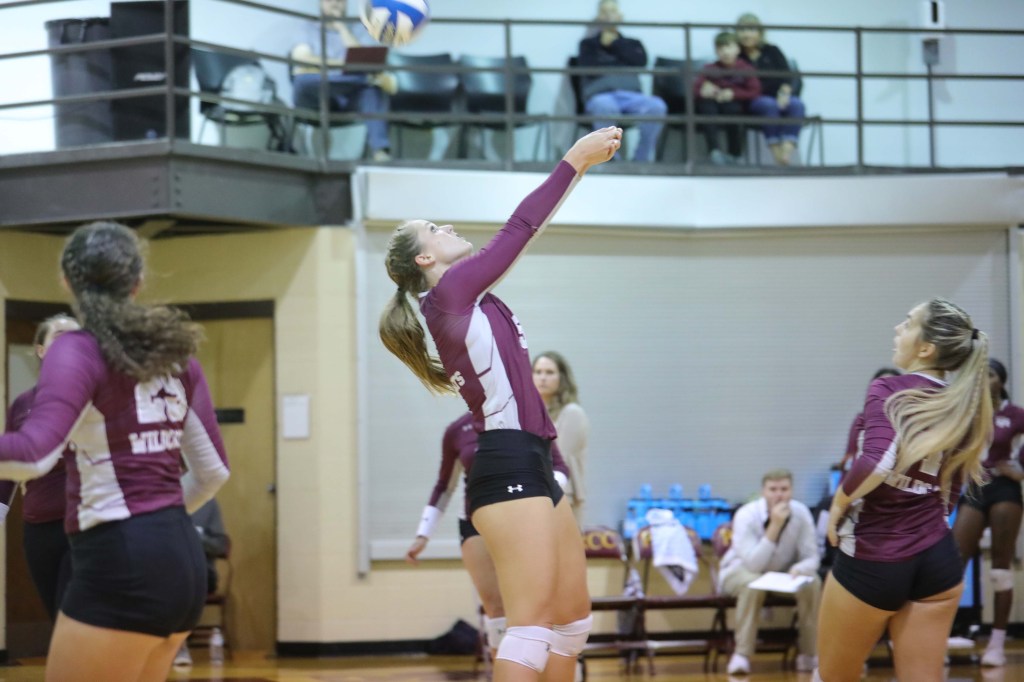 Willoughby was a force in the final two sets pitching in with crucial kills while staying on top of the opposing hitters. Submitted photo

The Wildcats took the first set of the night but dropped sets two and three by significant margins, before evening the score in set four.

“What a match,” head coach Haley Chatham said. “It isn’t easy to come back from down two sets with wide point spreads and put yourself back in the match, but these kids have it in them. They trust in and play for each other.”

SET ONE
Pearl River (11-3 overall) started off on the front foot scoring 11 of the first 15 points including back-to-back service aces by Diamond Jones (Gonzales, La.; East Ascension) that lead the Wildcats’ early surge.

Coastal Alabama-South (13-0) could never find its footing as the Wildcats coasted to a victory in the first set 25-17.

SET TWO
Pearl River started strong in the second set through a Jones kill, but the Sun Chiefs proved why they were undefeated, scoring early and often and putting the Wildcats at a disadvantage.

The Sun Chiefs won the set in dominating fashion 25-10.

SET THREE
Set three played out similarly to set two as the Sun Chiefs continued to control all the momentum despite falling behind 3-1 in the early going.

Pearl River could not find its footing after a few tough breaks went in the favor of CAS.

Sydney Salter (Vancleave) not only continued to be a force defensively but also sent the Wildcats on a run through her serving.

Jones led the way in the kills department with a few coming in huge moments late in the set. The Sun Chiefs made it interesting late but Pearl River outlasted the late push, claiming the set 25-22.

Coastal Alabama South immediately equalized and from then on out an intense back-and-forth contest ensued as neither team went away quietly.

Leighton Willoughby (Brandon; Northwest Rankin) led the way offensively for the Wildcats in the set with key kills and points.

The Sun Chiefs were able to rally, snatching a victory from the jaws of defeat as they claimed the set 18-16.

KEY PLAYERS
Jones continued her great season, pitching in a fair share of kills and a few service aces.

Willoughby was a force in the final two sets pitching in with crucial kills while staying on top of the opposing hitters.

Salter continued to impress on the defensive end, keeping the ball off the floor to keep chances alive as well as starting runs through her serving.

UP NEXT
The Wildcats return home this Friday to face MACCC rival Itawamba at 5 p.m. in Shivers Gymnasium.​ The match will be livestreamed at PRCCMedia.com/maroon.