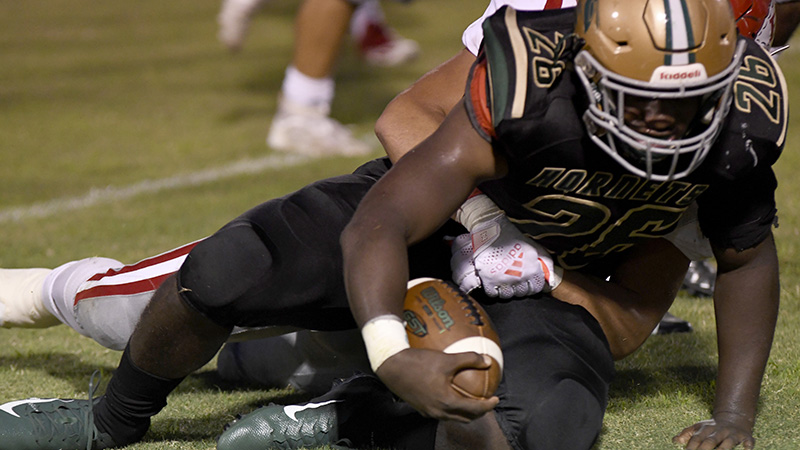 Poplarivlle’s D.J. Richardbey is brought down after a long run. Photo by David Thornton Jr.

The Poplarville Hornets clinched the first win of the 2021 season over the Biloxi Indians with a 24-14 finish.

It took the Hornets a few possessions on offense to find their rhythm but once they did they were in complete control. The Hornets were the first to score after a 16-play drive ending with a 13 yard run from Lawrence Jamison. That score came with 1:31 left to go in the first half. The PAT by Zach Carpenter was good, making putting the game at 7-0.

The Biloxi Indians quickly answered with a combination of air and ground drives resulting in a quarterback keeper touchdown by Deljay Bailey. Kai Etheridge’s PAT attempt fell between the posts, tying the game at 7-7 with nine minutes left in the second quarter.

The Hornets hit right back for a 10-play drive culminating in a a 10-yard touchdown run from Dj Richardbey, giving the Hornets a 14-7 lead with 5:37 to go until halftime. Biloxi failed to answer back even after a fumble recovery caused by Poplarville’s miss handled snap on the 41-yard line.

The Hornets had the ball coming out of halftime, and executed 18-plays with a 87-yard drive for a touchdown. PAT was good by Zach Carpenter extending the lead 21-7.

In the 4th quarter, the Indians put get 6 points on the board when Chris Norwood ran 35 yards to the endzone, cutting Poplarville’s lead to just one touchdown. The PAT was good by Kai Etheridge.

After two possession changes the Hornets increased their lead after another long 15-play drive ending with a 20-yard field goal from Zack Campander making it 24-14, giving Poplarville the lead with 1:52 left in the game.

Biloxi tried their best to score but time and Khalil Moore was not on their side. Moore had 2 big plays on the final drive sacking Biloxi’s quarterback at the 1:20 mark and broke up a pass with 28 seconds left. To cap off the win on fourth and long with less than 20 seconds left, Deljay Bailey threw an interception to Matt Will and that ended the game 24-14.

After the game Head Coach Jay Beech praised his team on their effort and hunger to win.

“I liked the look in their eyes, when we came into the huddle we were ready to go to war” said Beech. He added “It was a great team win and we laid it all on the line tonight against a good opponent.”