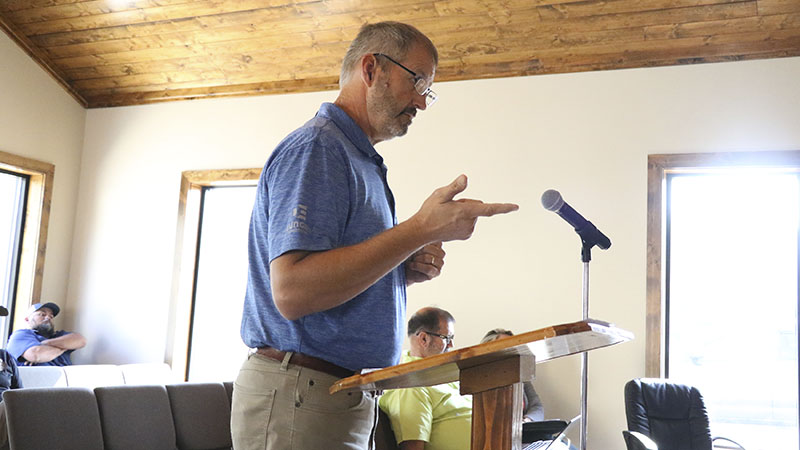 Les Dungan of Dungan Engineering gives members of the Pearl River County Board of Supervisors an update on the county wide paving project. That project is starting to gain steam, but has seen setbacks due to the recent rains. Photo by Jeremy Pittari

The number of COVID-19 cases are increasing within Pearl River County, putting this area in the list of top ten counties in Mississippi that have a high number of new cases.

Emergency Management Director Danny Manley said he was recently informed that 210 new cases have been reported in this county in the last two weeks, putting the county at eighth in the state for new cases. For comparison, he said the number of new cases in Hinds County, which is at the top of the list, was reported to be 1,316 in that same time frame.

Manley was also told by hospital administrators that nearly all beds in Highland Community Hospital are full and some patients have even been transferred from Forrest General Hospital in Hattiesburg to other medical facilities by plane because there were no other beds within driving distance.

According to previous coverage, all beds in Highland are not occupied by patients who have COVID, other medical ailments are included in that total number.

However, since most beds are full, medical staff are having trouble keeping up with the patient load.

Highland Hospital Administrator Bryan Maxie has said in previous coverage that most patients who need medical attention due to COVID were not vaccinated, and that most vaccinated patients who tested positive for the virus were able to go home for treatment.

In other business, the Supervisors heard an update about the countywide paving project. Les Dungan with Dungan Engineering said the project is about 15 percent complete, with about 4.92 miles of the planned 35 miles of roadway in the project paved. Another 9.89 miles of roadway is prepped and ready for paving.

The project kicked off about two months ago, but it has only been within the past two weeks that any paving work has been completed.

“What is killing us right now is the weather,” Road Department Manager Charlie Schielder said.

Now that some of the equipment the county ordered has arrived, Schielder said he can begin forming a second crew to help move the project along faster. County employees are doing most of the prep work for the project, or taking care of the DBST roads. Schielder is having trouble finding drivers who can operate some of the new trucks, but has a potential employee lined up.

Dugan said he is glad to see that asphalt prices are coming in less than projected. Anticipated costs of paving a mile was expected to be about $135,000, but so far that cost is closer to $83,000 per mile. If that trend continues, Dungan said the Board can decide to add more roads to this project, or roll the extra money into next year’s project.

If paving more roads immediately is the will of the Board, then Dungan suggests making that list now so crews can be dispatched in a more orderly manner to cut down on transportation time.

Schielder said he is scheduling crews and work to coincide with their proximity with each other, which is helping to keep the cost down.

District III Supervisor Hudson Holliday expressed concern about the slow progress in the project and the low number of miles involved. If the county is to keep up with road maintenance, 50 to 60 miles will need to be paved next year, he said.

Dungan reassured the Board that even though the progress has been slow moving, when the second county crew is in full force and the rains let up, more work will be complete.