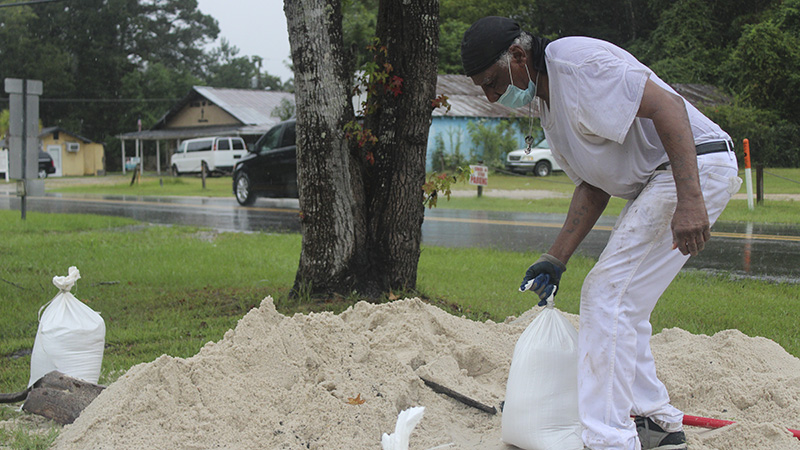 Sandbag locations were set up throughout Picayune Friday to allow residents to fill their own bags. Photo by David Thornton

An emergency meeting was held Friday by Poplarville Mayor Louise Smith and the Board of Alderman in an effort to declare a state of emergency.

Coastal counties along the Mississippi Gulf Coast can expect storm surge ranging from 2-11 feet, depending on the location where Ida makes landfall. Ida will move through out the state as it weakens, meaning strong winds and heavy rain for all residents in the path. Resident in Pearl River County won’t need to worry about storm surge, but do need to keep an eye on rainfall amounts and any subsequent flash flooding that could occur.

Poplarville Fire Chief Jason Bannister advised residents to evacuate the city if possible. He said that evacuation is voluntary, not mandatory. The storm shelter at the Fairgrounds in Poplarville opened Friday at 6 p.m. with the support of the American Red Cross.

Memorial Stone Medical Center in Wiggins Mississippi will be available for special needs residents who require medical attention and need a place to shelter from the hurricane.

Residents in the Poplarville area can get sand bags for their homes before Sunday’s storm at the Nation Guard Armory.

Within the city of Picayune, sandbag locations were set up at Leola Jordan Park  located on East Canal Street, JP Johnson Park on Rosa Street, Mildred Mitchell Park on Daniels Road, First United Pentecostal Church in Kendrick Lane and the lot at 1206 Pinewood Drive. It’s unclear how long sandbags will be available.