PRC softball has tryouts to build out squad 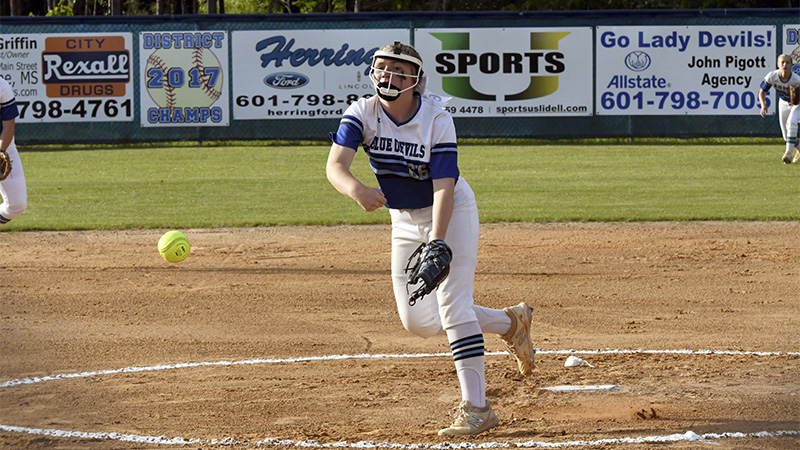 Coming Back: Jazmin Robertson throws a pitch during a Lady Blue Devils game. Robertson established herself as one of the team’s aces this season and will be returning next year. Photo by Jonathan Mitchell.

Head Coach Tony Labella had his returners help the incoming athletes understand the drills during the process that included speed tests, fielding drills and hitting drills.

The athletes weren’t put in any game specific situations and were instead evaluated on their own rudimentary skills and potential.

“I like for them to try where they’re most comfortable because usually that’s where they do the best at, but if they make the team and we realize there’s a backlog at a position or someone of the same age already there, we’ll move them around a bit. The tryout is just to see general skills,” Labella said.

The process is meant, for the most part, to evaluate up and coming talent progressing through the Lady Blue Devils program.

With the majority of athletes trying out were still in seventh or eighth grade, a major part of determining which athletes make the cut is hypothesizing how the player will develop in the future.

“Most kids that are younger, if they haven’t played at that level, you can’t just say this is what they look like today and say that’s it. We’ve had several kids that were borderline making the team and by the time they had practiced with us for a couple of weeks they were different players. You have to look into the future a little bit, and a lot of it is if their attitude is good. You can tell who is paying attention and can see which kids are really interested and have the desire to be out there,” Labella said. PRC had a very young team last year with only three seniors in the squad, and next season there will only be two seniors in the team.

The youth movement paid off with the team being named co-district champions last season and earning a playoff berth.

However, the onus is now on those athletes coming back to improve on last year’s performances.

Gaining another year of experience is hugely beneficial, but if the players don’t work to get better then the team won’t see any of the benefits that come with having that experience.

“It was nice of everyone saying how young we were, but the coaches are past that. Just because you’re so young and did good things, I don’t want the kids to think that just because we’re older that we’ll be better. The accolades were good, but we were not where we wanted to end up. It’s not a given that next year we’ll improve (without putting in the work),” Labella said.