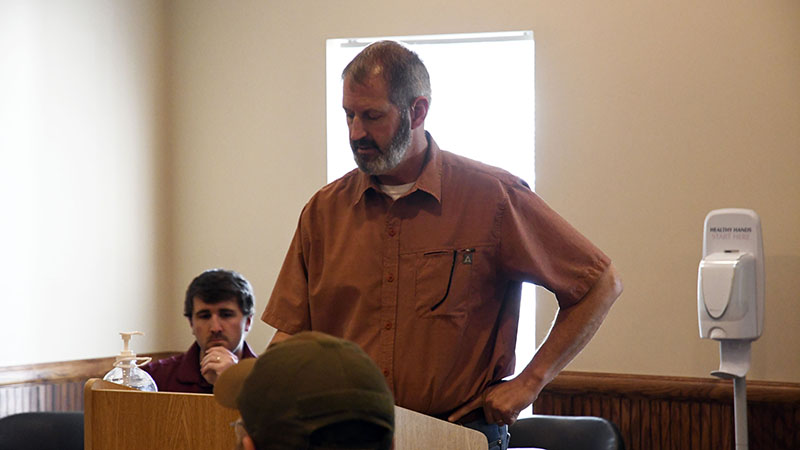 Les Dungan gives a report to the Board of Aldermen regarding potential options for renovating the Poplar Springs Lake pier. Photo by Jonathan Mitchell

The Poplarville Board of Aldermen listened to a report regarding renovations to a local pier during its regularly scheduled meeting Tuesday evening.

Les Dungan of Dungan Engineering came before the Board to speak on the Poplar Springs Lake pier.

The pier is in need of renovation due to its old age and along termite damage it sustained previously.

Dungan said he’s currently in the process of determining what options would best serve the Board when it comes to replacing the pier seeing as there are multiple courses of action available.

One possibility is a grant program with the Wildlife and Fisheries Department, where the department would perform the renovations with costs expected to be split 50-50 between the grant and city of Poplarville.

The Board made no motions regarding the report, but will likely come to a conclusion on what to do at the next regularly scheduled meeting in May.

Police Chief Daniel Collier then came before the Board and notified the Aldermen that a donation of $1,000 had been made to the Poplarville Police Department from Hancock Whitney.

Collier said the funds could be used for whatever the department may need and would go straight into the Police Department’s auxiliary fund.

He also updated the Board on the department’s NIBRS reports, which have been ongoing.

Collier said there have been some minor issues regarding how certain crimes were reported after a couple system changes, but overall everything is running smoothly.

There were also two leak adjustments the Board approved.

The first was for Coneheads where the account balance would be reduced by $326.47 leaving an adjusted credit balance of $17.61.