Poplarville’s season comes to an end with loss to Sumrall 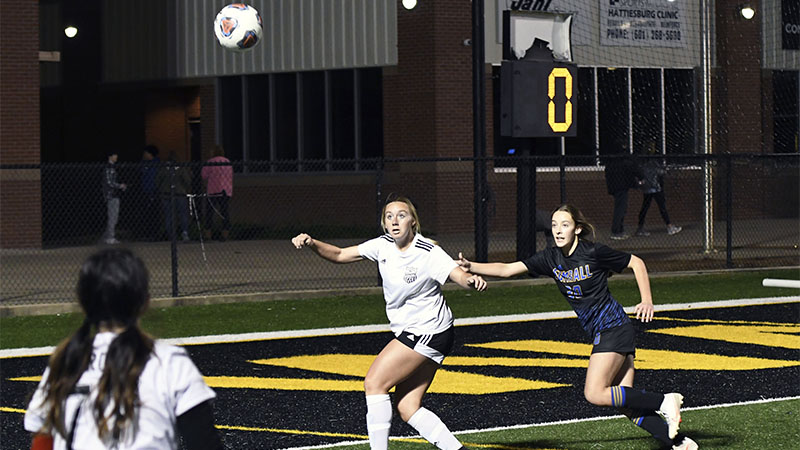 In The Air: Forward Chasity Dearman waits for the ball to come to her after a Lady Hornet throw in during Wednesday's playoff game. Photo by Jonathan Mitchell.

Poplarville’s Lady Hornets battled through injuries to key starters and COVID-19 quarantines to qualify for a first round playoff match against Sumrall, but a strong offensive performance saw the Lady Bobcats win 5-1 Wednesday evening.

Sumrall scored three in the first half, then put two more in the back of the net in the second half as Evelyn Kimball provided the only goal for Poplarville.

Poplarville as a team had several seniors on the squad, so the first round loss will be the last time those athletes get to represent Poplarville on the pitch.

Head Coach Beth McShea said her veteran players did a great job this year of leading by example.

No season goes perfectly, and there were plenty of challenges the Lady Hornets had to deal with.

However, even with all the obstacles in Poplarville’s way, the team battled and made it to the playoffs.

“We’ve been to the playoffs more during (these seniors’) tenure than we had ever before in school history. That’s huge and their leadership has been huge and that’s why it’s super emotional for them. They’re close with these girls,” McShea said.

However, there’s still plenty of hope for the future of the program as several talented players are coming through the pipeline and ready to make an impact on the varsity level.

One such player is eighth grader Addy Grace Alexander, who played the majority of the match against Sumrall on the right wing.

The youngster performed well, getting in dangerous positions offensively while also working back defensively for the Lady Hornets.

McShea said Alexander’s work ethic has put her in a good position to be successful moving forward.

“She’s worked her butt off for us this year as an eighth grader. Losing (starting winger Morgan Westling to injury), she’s been able to step in and fill that role and that’s been huge. She’s going to do great things for us. I’m glad we have more years with her,” McShea said.

A dominant district run, which ended with the Lady Hornets having a 7-1 record, along with a playoff appearance shows how resilient the athletes were, especially in light of the obstacles put in place as part of the pandemic.

“It’s just change and high school kids don’t always do well with change, but they’ve done a heck of a job in battling back from everything. Being able to make it (to the playoffs) and finish district 7-1, only dropping one game, that’s huge. We haven’t done that since this class’ seventh grade year,” McShea said.

The loss to Sumrall knocked the team out of the playoffs, so now the athletes will have some time off before getting right into offseason workouts and training sessions.

Last year’s offseason was cut short because of the COVID-19 pandemic, so McShea is hoping to take full advantage of the time given this year to help her players grow and develop.

“Hopefully we get to have a spring. We didn’t last year and that took out a lot of the growth area for some of our younger players to be able to step in and give the seniors some relief at different times,” McShea said.