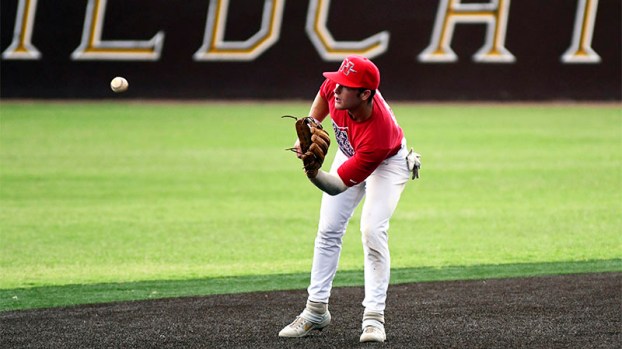 Hole To Fill: Blaise Breerwood was one of the team's seniors last season that has since graduated and his production will need to be replaced this year. File photo by Jonathan Mitchell.

Last year’s baseball season ended abruptly as COVID-19 forced the closure of schools and cessation of sports across the U.S., so now the Poplarville baseball program has had to adapt to this year’s altered timeline.

Head Coach Slade Jones said there are usually 12 to 14 athletes who take part in the daily practices with several members of the team missing as they compete in other sports.

The focus for the athletes who do participate has shifted from conditioning and weight lifting in the summer to getting some reps in on the field this fall.

Pitchers are starting to throw regularly while facing hitters who are looking to fine tune their swings as the players deal with the after effects of the quarantine that previously took place.

As the months pass and the season draws near, the practices will take on new intensity as more inter-squad competitions take place.

There’s a specific level of concentration and effort expected, but it’s been slow going trying to meet those requirements this offseason.

Aside from some players taking part in summer ball leagues, the athletes only had a small period of time off before having to return to the grind of practice.

“They did that for almost a year then the season got here, and then in a blink of eye it was gone and we’re right back to (practicing). It’s been a little bit of a challenge getting things back to normal,” Jones said.

Jones said it’s still too early to tell how the early cancellation of the last season and the strange summer will affect his team’s performance this year.

Pitchers are only now getting back on the mound, and the hitters are in the same position.

As the athletes deal with the consequences of an unusual spring and summer, they also have to adapt to the COVID-19 protocols still in place.

Athletes wear masks during the school day, have their own water bottles in practice and use hand sanitizer frequently, all while practicing social distancing when possible.

However, now that the players have settled into this routine it’s becoming easier to follow the guidelines.

“I think it’s becoming our new norm. At first it was a big deal, but now they’re getting used to it and not even thinking about it. Hopefully we’ll get this under control,” Jones said.

The team had several key players graduate and will need to have other athletes fill those holes.

Jones said veterans like Eli Goodwin, Jon Babiowski and Jordan Belsome will all have to step up and take on larger roles this season for the Hornets.

All three spent time on the mound for the Hornets in previous seasons, but now will have to take on defensive roles and become a weapon at the plate.

“They knew coming into the year they’d have to hit for us, where as last year we relied on them on the mound. Now we’ll have to ask those seniors to stay in the line up for us and hold a defensive position down. Eli Goodwin was one of our main guys on the mound, main guys on defense and now has to be a main guy in line up. Same thing with Belsome and Babiowski,” Jones said.