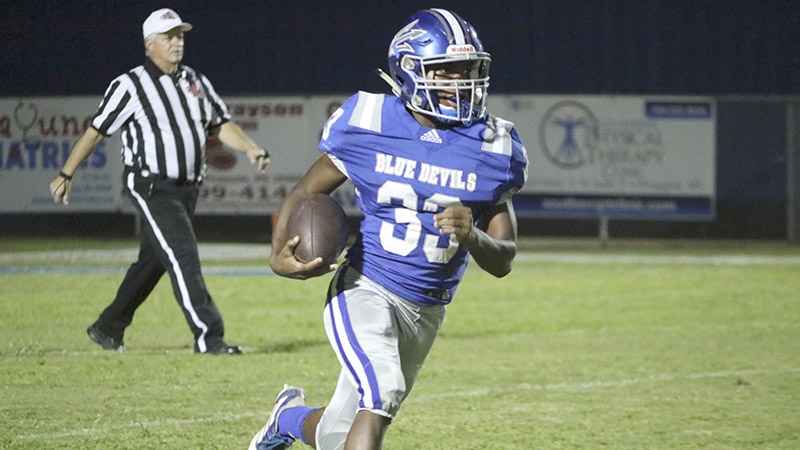 Destin Coleman carries the ball for Pearl River Central during Friday's game against the Pascagoula Panthers. The Panthers took home a 37-8 win over the Blue Devils. Photo by Jeremy Pittari

Pearl River Central’s first district game of the season ended with Pascagoula taking home a 37-8 win.
Head Coach Jacob Owen said the loss was due to a few factors.
“I kinda sound like a broken record, but the margin of error for us is very small,” Owen said.
“We need to bring our A game every week. I know our effort is there. Our kids are playing their guts out. We make bad mistakes in an inopportune time and you can’t do that against a very good football team. That’s what Pascagoula has. It’s the best football team we’ve played to date.”
Owen’s comment about his athletes playing their heart out was evident in the first half. Even though the game started with a Pascagoula lead when Kayvon Barnes carried the ball from the 1 yard line with 7:26 left in the first quarter, giving the team an early 7-0 lead when Drayden Russell’s kick fell through the uprights, the Blue Devils played effective defense and closed that gap in the second quarter.
That play came after a long drive that covered the remainder of the first quarter and ended with 9:47 in the second when Ty Herring escorted the ball to paydirt from the one yard line.
Dalton Lee came on the field for the PAT, completing a pass to Tyce Yarborough for two points, giving PRC the lead at 8-7.
That lead would hold until the just before halftime when Russell completed a field goal attempt that was hiked from the 15 yard line, giving Pascagoula the lead at 10-8.
Pascagoula came back in the third quarter and dominated the scoreboard for the rest of the game.
After the Blue Devils turned the ball over on downs, the Panthers capitalized on the very next play with a 70 yard run by Keilon Parnell from the team’s own 30. With 8:44 left in the third, Russell completed a PAT attempt to give the Panthers a 17-8 lead.
The Panthers scored again with 2:43 in the third via a 20 yard run by Parnell, to put the score at 24-8 with Russell’s PAT. The Panthers also scored during a pass play from the 19 yard line between Parnell to Thompson with 3:39 in the fourth. The PAT was blocked by the Devils defense, leaving the score at 30-8.
A bad snap at the Pascagoula 29 by the Devils in the fourth that was picked up by Kanye Jackson and toted to the endzone resulted in the final scoring play for the Panthers. Russell’s PAT put the score at 37-8.