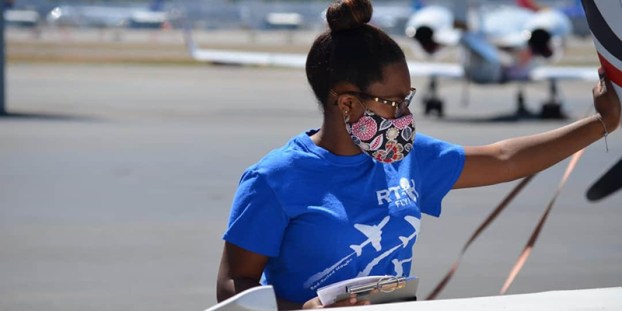 to the skies: Amber Jones, a teenager from Saucier, Miss., is learning how to fly as part of a pilot program in California. Her grandmother, Jeannette McCastile, said she is proud of her granddaughter for working toward her pilot’s license at such a young age. Submitted photo.

Teen with local ties learning to be a pilot

Moving from Mississippi to Washington gave one teen the opportunity to take to the skies.

Amber Jones, originally of Saucier, Mississippi, is a 16-year-old who is getting hands-on instruction on flying airplanes through the Red-Tailed Hawks, a program that introduces underrepresented students to the field of aviation.

Jones was able to complete ground school and begin flight training. Her first solo flight is planned for the fall and by the time she’s 17, she’ll have enough hours of flight time to get her private pilot’s license.

“I am so proud of that child,” said Jones’ grandmother Jeannette McCastile, a resident of Pearl River County.

Jones said being in the air offers a new perspective.

“Sometimes I’d be stressed before I went up and flew, but as soon as I was in the air, all of that stress went away,” she said.

Although Jones was not able to find an opportunity to fly until after she left Mississippi, she said there is a similar program based in New Orleans—a chapter of the Black Pilot’s of America called the New Orleans Golden Eagles.

“If that opportunity comes to you, make sure you take that opportunity…don’t ever let anyone tell you that you are not worthy enough, or valued enough or that your skin color is too dark to do this,” said Jones.

Starting this year, School Resource Officers with the Picayune School District are no longer part of the Picayune Police Department.... read more