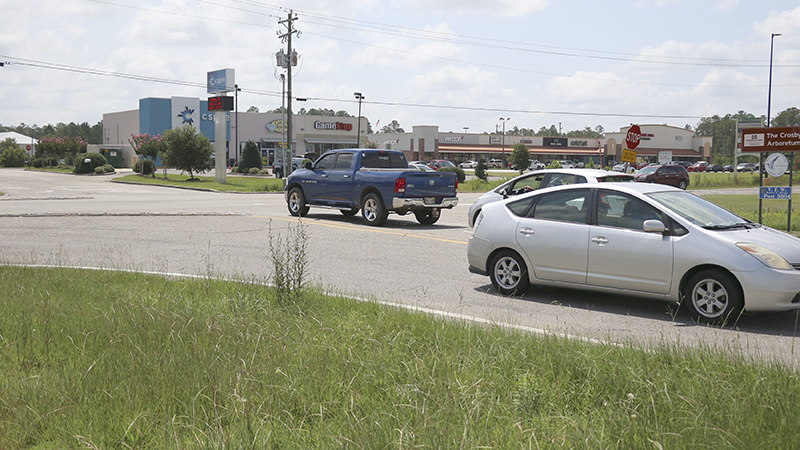 Earlier this month, Picayune’s City Council submitted three projects for possible BP funding.
The proposed projects submitted for approval entail adjustments to the main entrance to shopping centers along Frontage Road, improvements to three of the city’s parks, and extension of East Jerusalem Road and construction of the corresponding infrastructure.
Any requests for BP funding from cities in the state are sent to an advisory board, who will decide which projects to send to the Legislature for final approval, according to previous coverage.
Jonathan Hickman with Dungan Engineering said it’s unlikely that all three of Picayune’s proposals will be approved for funding.
Proposals for the Frontage Road adjustments entail two options, a roundabout, or relocating Frontage Road so it connects with adjoining roads while also taking into consideration the current water retention ponds in that area.
Creating the roundabout would be conducted in just one phase and cost about $3.5 million. The option to relocate Frontage Road would be conducted in two phases, with phase one costing $1.6 million and the second phase costing $1.7 million for a total of $3.3 million.
To build the roundabout would take about a year, while the two phase option is expected to take twice as long due to environmental issues, Hickman said.
Either option will create access to Home Depot from Frontage Road.
Another proposed project entails upgrades to three local parks, Friendship, J.P. Johnson and Leola Jordan. Those improvements will include additional parking at the baseball and softball fields, additional parking at Leola Jordan and J.P. Johnson Parks and a new playground at Friendship Park. Hickman said additional changes will be made to make the parks more compliant with the Americans with Disabilities Act.
Additions at Friendship Park include a new tennis court next to the current one along with an adjacent parking lot, a new playground, a camera system throughout, and new walkways and turf on various baseball/softball fields. At J.P Johnson and Leola Jordan parks, additional lighting is proposed for the basketball courts and parking is planned.
The total cost for the suggested improvements at all three parks is $405,000.
Along East Jerusalem Road, the plan is to create a road on the other side of Interstate 59 that mirrors Frontage Road. The $1.9 million project would create an area in the city ideal for development. Hickman said the project will widen the road and install necessary infrastructure. Initial coverage of the project states Resurrection Life Church has an interest in the project since the church owns property in that area, but Hickman added that the church is not the only owner of property in that area. The project, if approved, will build about 1,600 linear feet of roadway. Currently, the project would not entail taking property away from where Ford Realty is located, but if the need to four lane the road arose, then that would be the case, Hickman said. He estimates it may be 10 years at the earliest before that would need to occur.
Any or all projects selected for funding will require a 20 percent match from the city, Hickman said. The projects will go before the committee on Aug. 28, before being sent to the Legislature for final approval.