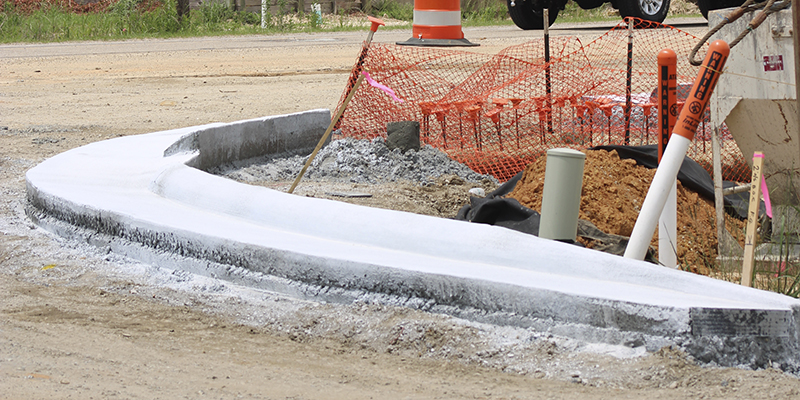 curb and gutter: Crews along Highway 11 are installing concrete curbing this week as part of a project to widen the highway from the intersections of Lakeshore Drive and Cayten Street. Cathy Cook | Picayune Item

Crews began laying curb and gutter features along the east side of Highway 11 as part of the Highway 11 expansion project on Monday, said Mississippi Department of Transportation engineer Dexter Childs.

Drivers may also notice that the traffic signal time at the intersection of Highway 11 and Highway 43 was adjusted to give Highway 11 traffic more time to pass through the intersection, said Childs. The adjustment was made last week to improve the flow of traffic.

Barriere Construction has a $14.4 million contract to widen Highway 11 to four lanes from Cayten Street to Lakeshore Drive, according to previous coverage. The expansion is projected to take three years to complete, according to previous coverage. A second phase is planned, which will include replacing the bridge over the East Hobolochitto Creek. That work will be under a separate contract.

Residents can expect to see four to five crews working on different parts of the project, which will typically include three crews from Barriere Construction and a curb and gutter crew. The curb and gutter work is being done by subcontractor Simmons Erosion Control, said Childs.

Short stretches of lanes on Highway 43 near the Highway 11 intersection have been blocked off for longer than anticipated, said Childs. Blocking the lanes off has not had a major impact on the flow of traffic, said Childs, and removing and replacing the barrels is time consuming, said Childs. So instead of removing the orange barrels on Highway 43 then putting them back up later, the contractor will keep the lanes blocked on Highway 43 until all of the work in that area is complete.

Lane closures will be shifted from the east to the west side of Highway 11 after drainage work and asphalt paving on the east side of the Highway are complete, Childs said.
There is not a firm timeline for when that work will be complete, but at a minimum it will take several months, said Childs.