Blueberry Jubilee pushed back to October 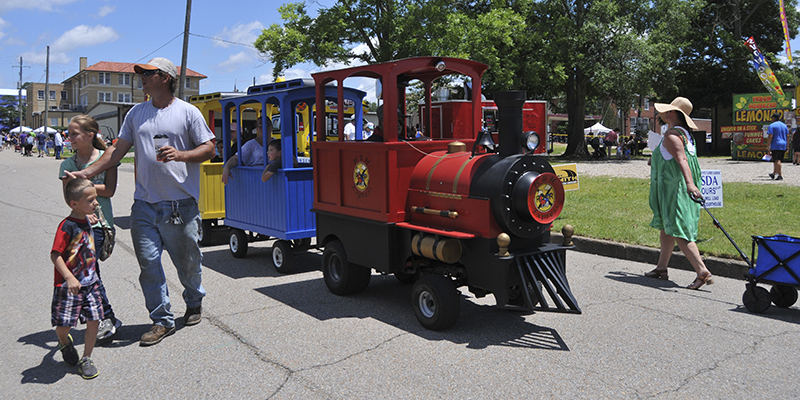 rescheduled: Poplarville’s largest tourism draw, the Blueberry Jubilee, had to be pushed back to October due to the COVID-19 pandemic. File photo by Cathy Cook.

For the first time the annual Blueberry Jubilee has been postponed to October.

“We have the Jubilee the second Saturday of June every year,” said Jubilee Council Chairman Mark Bridgers. “We’ve had tropical storm scares. We’ve had rain obviously a few times. We still went on. There is no alternate date for the Jubilee normally.”

The Blueberry Jubilee began in the early 1980s. The annual event typically brings out 8,000 to 12,000 attendees, has 150 arts and craft vendors, 25 food vendors and 10 performers, said Bridgers.

With the COVID-19 pandemic, the Jubilee Council made a unanimous decision to postpone the event to October 3. The festival is normally scheduled in June to align with blueberry season. The Jubilee will be held in June again in future years. No one on the council wanted to cancel the event, which is why they waited until early May to make a decision to postpone, said Bridgers.

“We were able to meet recently and determined that it would be very difficult to do it this year on that date because so many vendors were unsure as to being able to attend,” said Bridgers.

Although, the Jubilee will not align with blueberry season this year, blueberry growers understand the need to postpone.

“I think they’re trying to protect the public and that’s what we all need to be thinking about at this time right now,” said Polly Arnold with Aunt Polly’s Farms. “You won’t have fresh blueberries with them postponing it to the fall but we all have a price that we have to pay at this time.”

Arnold plans to be a vendor at the postponed event in October if businesses are open to the public again. Blueberry lemonade is her business’s main product, and farmers markets and festivals are where they primarily make sales.

“All of our farmers markets have been cancelled this year. That’s a small price to pay compared to what a lot of other people are having to face,” said Arnold.

Jerry Kirby, owner of Picayune Blueberry Farm, is not sure if he will be a vendor at the Jubilee in October.

“I realize they couldn’t have it at the scheduled time in June, but my opinion, if I had to vote on it, I’d say cancel it, because October third, there’s not going to be any blueberries unless they’re frozen and it’s not in the spirit of the thing,” said Kirby.

Sales at the Jubilee make up a relatively small portion of Kirby’s business. At his farm, he offers u-pick and we-pick services, which can still be conducted while implementing social distancing. Still, the farm owners have considered selling jellies and jams, alongside frozen blueberries at the Jubilee in October, because they’ll be able to visit with people and see old friends.

Althea Tavai with Althee’s Jellies and Jams plans to sell blueberry jellies and jams at the Jubilee despite its October date.

“I’m sure it’d be hard for people who serve fresh blueberries, but I make the pies and the jellies and jams so I can freeze my blueberries and use them,” said Tavai. “It would be difficult for those who just sell them. Maybe they can sell the plants. It’d be perfect time for planting them in October.”

Organizers still plan to include all of the normal Jubilee festivities in October: vendors, performers, a car show, a dog show, the Miss Blueberry Pageant that takes place a week or two before the festival, a 5K and the baby crawl.

The Jubilee will provide whatever facilities it needs to due to COVID-19, such as sanitizing stations, said Bridgers. Since the new date is four months away, organizers do not know yet what public health measures they might need to take.

“We don’t know, but we are prepared to take whatever measures we can to provide that if needed at that point,” he said. “I hope we don’t have to do anything. I hope it’s all done by then, but we will address that obviously if needed.”