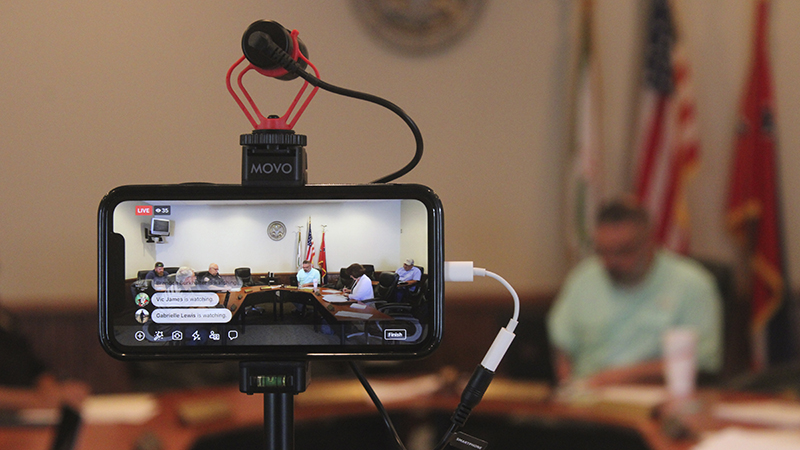 SIGN OF THE TIMES: An iPhone on a tripod livestreams Tuesday’s meeting of the Poplarville Board of Aldermen to ensure social distancing can be maintained by allowing the public to view the meeting remotely. Photo by Cathy Cook

Poplarville High School will be allowed to hold a parade to celebrate graduating seniors on May 21 through downtown Poplarville.
The Poplarville Board of Aldermen approved a request to hold the parade from the high school’s administrators during Tuesday’s meeting. Numerous seniors made the request hold a parade, according to the request. Social distancing will be required.
In a separate matter, the Board discussed when City Park might be able to reopen and decided the city will try to reopen just the park’s walking track on Friday. The splash pad will remain closed by keeping it turned off, playground equipment will be blocked off with caution tape and the city is discouraging gatherings in the park. The Governor’s Executive Orders still limit gatherings to no more than 20 people outdoors.
The Board approved the release of a $6,407 retainage to Huey P. Stockstill LLC for work on the City Park parking lot. The only work left to do in the paving project is to place eight more concrete bumpers, which will be done by the Public Works Department. The Public Works Department placed 38 concrete bumpers in the parking lot Tuesday and also repainted park benches.
In a separate matter, the Board approved extending the city’s agreement with Waste Management of Mississippi for three more years. Board member Tony Smith voted against the contract extension. The city is informed of the rate for the year at about August, said City Clerk Jane O’Neil and the rate will be based on the national consumer price index. Typically there is not a significant increase in the garbage collection rate, said O’Neil.
In other business the Board:
—Approved a $20,000 grant from the CARES Act for the Poplarville-Pearl River County Airport to help offset the decline the airport has seen in revenue due to the pandemic. The grant requires no match. The Pearl River County Board of Supervisors already approved the grant.