Minor damage reported due to storm 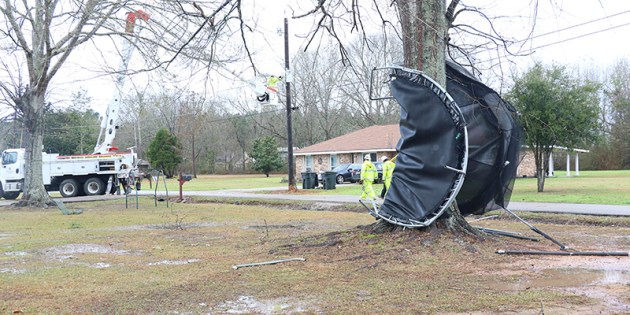 WRAPPED UP: A trampoline was blown into this tree along White Chapel Road during a storm Wednesday night. Photo by Jeremy Pittari 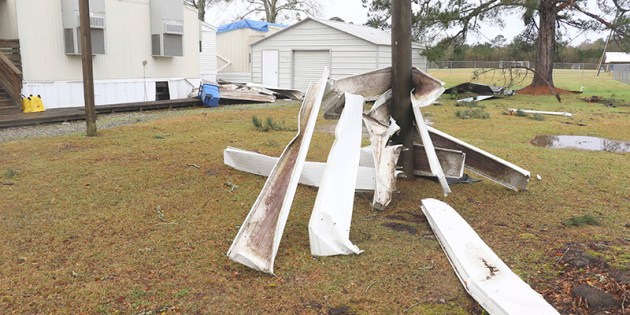 BLOWN TO BITS: Pieces of what was an awning and metal roof line this area behind the district offices of the Pearl River County School District. Superintendent Alan Lumpkin said the roof being blown off the building led to water damage in all of the offices within that building, seen in the background with a blue tarp. As a result, the staff had to be relocated to another building. No injuries were reported as a result of the storm. Photo by Jeremy Pittari

A strong storm passed through Pearl River County early Thursday morning, causing some damage to offices at the Pearl River County School District.
Superintendent Alan Lumpkin said he was awakened by the storm at about 4 a.m. Hearing the strength of the storm prompted him to stop by the various campuses and District offices. While no damage was noted at any of the campuses, a large tree at the front of the District offices had fallen and one of the mobile buildings being used as office space suffered roof damage, causing those personnel to be moved to the Board of Trustees meeting room.
Lumpkin said the roof damage occurred when an attached awning got blown away, peeling back part of the roof. He said all six offices in that building suffered water damage.
As a result of having to relocate those staff to the Boardroom, next week’s Board of Trustees meeting will be held in the Chapel at the Endeavor Campus, located at 461 Burgetown Rd., Carriere.
The National Weather Service information from that night indicates that there were 75 mph wind gusts during Wednesday night’s stormy weather, said Emergency Operations Manager Danny Manley.
There was additional damage in the subdivision north of the high school where shingles were torn off of roofs, said Manley.
A trampoline was also wrapped around an oak tree in that subdivision.
Despite the property damage, there were no injuries reported, said Manley.
Another area that sustained significant damage from the high winds was the intersection of Lakeside Drive and Jolly Roger Point, said Manley. Power lines and trees were downed in that area.
Mississippi Power spokesman Chris Vignes said that the company’s line crews were ready to address any trouble and that their system held up well. As of Thursday morning, there were no customers currently without power, said Vignes.
Coast Electric had 52 line workers repairing damage in Pearl River County Wednesday night and Thursday morning, said spokesperson April Lollar via email. Most of the power outages were caused by tree limbs on lines and downed trees, said Lollar. One broken pole had to be replaced, which caused the longest outage of approximately an hour and a half, said Lollar.