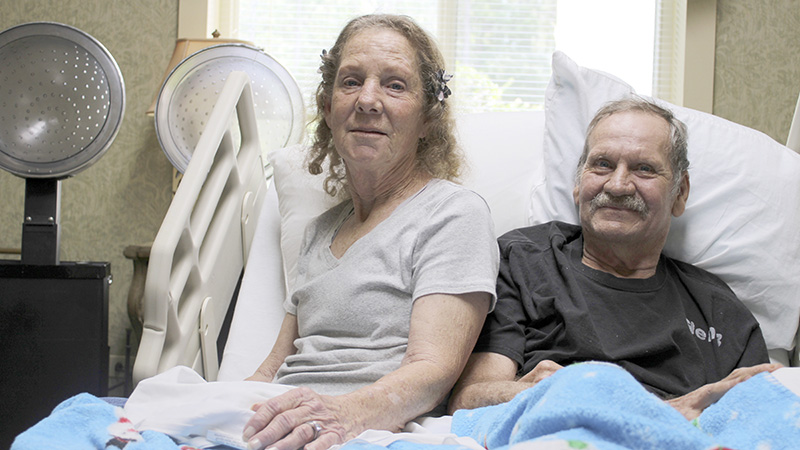 Cindy and Glenn Burlette sit together on their twin bed in the Picayune Rehabilitation Center’s salon room. The couple stayed in the salon after their wedding Thursday, while they waited for their shared room to be set up. Photo by Cathy Cook

A couple that met as residents in the Picayune Rehabilitation and Healthcare Center tied the knot Thursday after a four-month romance.

Cindy and Glenn Burlette met when Cindy was going to get coffee and Glenn was headed outside to smoke, Glenn said.

“It was love at first sight,” Glenn said.

Cindy came to the center six months ago for rehabilitation to her hips, she said, while Glenn began his stay at the center last year after suffering a stroke, he said.

Both have been married before—Cindy for 35 years before being widowed and Glenn for 16 months 20 years ago.

Glenn has been lonely since his first marriage ended and was looking for love, he said. Cindy was lonely too, she said, but was surprised to find a new partner.

“You don’t think that’s ever going to happen,” she said.

Cindy was not interested in even a boyfriend at first, Glenn said, but he kept bringing her coffee and buying her cigarettes.

Glenn chose the Fourth of July for the wedding date, so fireworks would go off on their wedding day, he said.

Cindy’s nine grandkids and two great grandkids attended the wedding, as did Glenn’s brother and sister-in-law.

Glenn bought wedding rings from another resident who sells jewelry, he said. However, the first rings went missing when Glenn went to get them resized, so he bought a second set. On the day of the wedding, the original wedding rings turned up, Cindy said.

The ceremony was not elaborate, but afterward the couple celebrated with a champagne toast and wedding cake. Cindy wore a knee length peach wedding dress.

The couple moved from their single rooms into the center’s salon room Thursday, while they waited for their shared room to be set up, Cindy said.

Glenn’s home burned down shortly after he became a resident in the center, he said.

“His brother is making arrangements to rebuild it and eventually we can move back into the house and try to live our own lives,” Cindy said.

Both Glenn and Cindy are happier after getting married, they said.

Park rental fees disputed for second time in as…