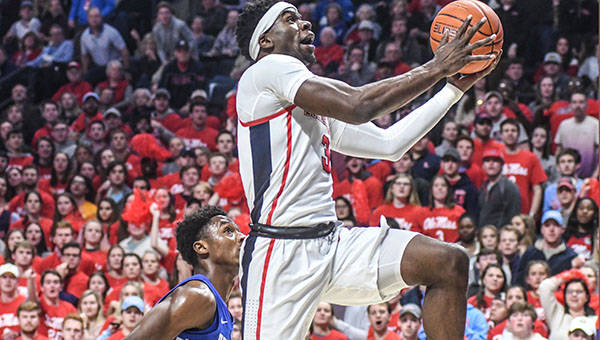 OXFORD — Former Ole Miss guard Terence Davis threw his hat in the NBA draft conversation last year as a rising senior, only to come back and be a big part of the Rebels’ NCAA Tournament run in 2019. Now Davis has no option but to go to the draft, and he’s making some moves in the process.

Playing these last few days at the G League Elite Camp in Chicago, Davis was undoubtedly one of the big winners of the three-day event. He was among 11 players from the camp to earn an invitation to the NBA draft combine that starts Thursday in Chicago.

The G League Elite Camp gave 29 draft-eligible players an opportunity to showcase their talents in front of NBA scouts and a few potential general managers. Players participated in a myriad of skill and agility drills, as well as some live, five-on-five scrimmages.

Davis took hold of that opportunity and ran with it. Playing 22 minutes in the second scrimmage, he scored a game-high 24 points on 10-of-15 shooting, and added three rebounds and three assists. No one else in the game scored more than 16 points.

“We played in front of several NBA GMs and scouts, so like I said, it’s just another opportunity to showcase those skills,” Davis said.

As a senior at Ole Miss, Davis averaged 15.2 points, 5.8 rebounds and 3.5 assists, while being named to the All-Southeastern Conference second team. ESPN’s NBA draft best-available prospects list Davis currently at No. 79. CBS Sports’ rankings have him at No. 58.

There are 60 picks in the two-round NBA draft scheduled for June 20.

“Terence Davis is a guy who stood out to me,” said ESPN’s Mike Schmitz after the G League Camp. “(He’s) explosive and gets out in transition. He can make shots and he’s a hard-nosed defender when he fully buys in.”

A total of 77 players have been invited to the NBA combine.

Mississippi State’s Quinndary Weatherspoon had previously earned an inviation, and his teammate Reggie Perry got one of the 11 spots from the G League Elite Camp. Perry, a freshman forward, posted an 18-point, 10-rebound performance during one of the camp’s scrimmage games.