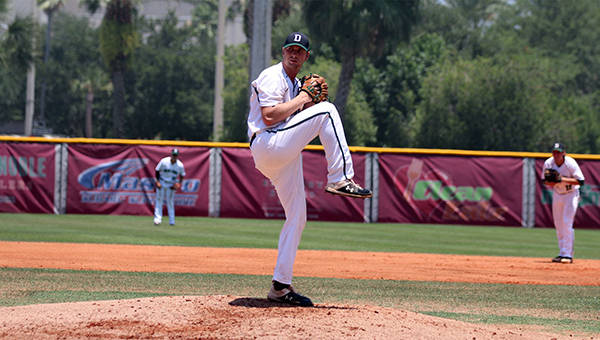 Danny Sirven tripled in the tying run in the eighth inning, and then Tampa scored three times in the top of the 11th to beat Delta State 6-3 in Game 2 of their super regional series.

Tampa (41-14) swept the best-of-three series to advance to the Division II World Series in Cary, N.C. The Spartans are in the World Series for the 18th time.

Delta State (42-14) was seeking its 13th World Series berth, but lost two tough games. After dropping Game 1 on Friday by a score of 3-1, the Statesmen took a 3-2 lead into the eighth inning of Game 2.

Drew Ehrhard led off with a single, and Sirven followed with a triple to right field to bring him in to tie it at 3.

Delta State left two runners on base in the bottom of the eighth, and one each in the ninth and 10th innings. Finally, in the 11th, Tampa broke through to take the lead for good.

A pair of two-out walks, the second with the bases loaded, brought in the go-ahead run. Ehrhard then singled to score two more and give Tampa a 6-3 lead. Delta State went down in order in the bottom of the 11th, and the Spartans were on their way to Cary.

Ehrhard finished the game 5-for-6 with two RBIs and two runs scored for Tampa, and Sirven had two hits and two RBIs.

Delta State pitcher Dalton Minton went nine innings, struck out nine, walked none and allowed three runs — only one earned — but left with a no-decision.

Josh Russell had two hits and an RBI for Delta State.

Ole Miss beats Georgia to get back to SEC…