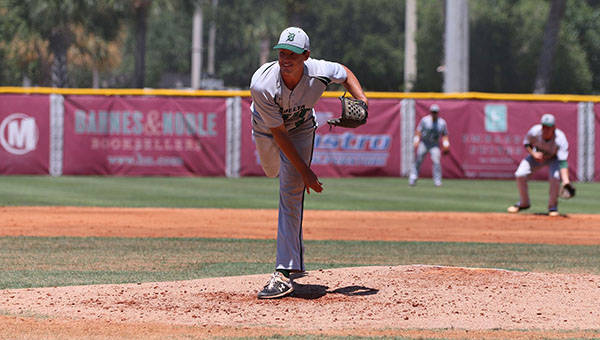 TAMPA, Fla. — Tampa took advantage of a throwing error on a bunt and a dropped throw by the catcher to score three times in the sixth inning and beat Delta State 3-1 Friday in Game 1 of their NCAA Division II super regional series.

Delta State took a 1-0 lead in the top of the sixth when Brett Young scored on Darek Sargent’s infield single, only to see the Spartans respond with three unearned runs to take the lead for good.

Tampa’s Drew Ehrhard and Danny Sirven singled and scored on a throwing error on Steve Mangrum’s sacrifice bunt attempt. Mangrum scored when the throw home on a ground ball was dropped.

Keven Pimentel pitched a complete game for Tampa (40-14). He allowed seven hits, but did not walk a batter and finished with five strikeouts. He was helped by his defense, which turned three double plays.

Hunter Riggins also went the distance for Delta State (42-13). He gave up seven hits and two walks in eight innings, and struck out one. Riggins has only allowed one earned run in 34 innings in the postseason.

Game 2 of the best-of-three super regional is Saturday at noon. If Delta State wins, they’ll play Game 3 immediately afterward. The winner of the super regional advances to the NCAA Division II World Series.