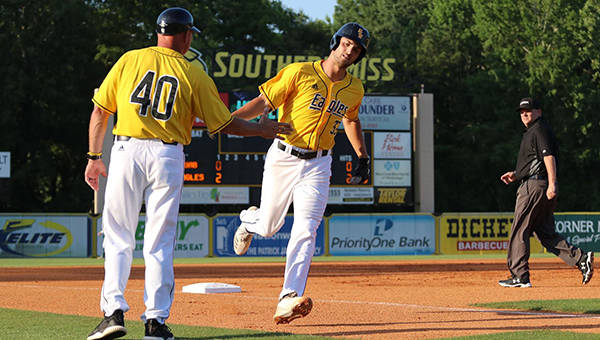 Matt Guidry and Matt Wallner each homered to stake Southern Miss to a lead in the first inning, Stevie Powers threw six shutout innings, and the Golden Eagles built an eight-run lead before claiming a 10-5 victory over UAB.

“Well, we played well enough to win a baseball game,” Southern Miss coach Scott Berry said. “It started there in that first inning putting a zero up in the top of the first and following with three (runs) in the bottom. We’re 15-1 now when we’re ahead in the first inning, so obviously, that’s a key.”

Southern Miss will be playing for another win and an outside chance to share the C-USA regular-season title with Florida Atlantic.

The Owls laid claim to the No. 1 seed in next week’s C-USA Tournament by beating Middle Tennessee 8-7 on Friday. Florida Atlantic has a one-game lead on Southern Miss, and owns the head-to-head tiebreaker.

For Southern Miss to claim a piece of the title, FAU would have to lose and the Golden Eagles win.

“Hey, school’s out and we’re playing baseball, so, there’s not too much to complain about,” Guidry said. “If we’re going to complain about being in second place, then maybe we need to humble ourselves a little bit. First-place is always the goal. It’s what this program expects, every year. But, you have to find the positives in everything. I mean, we could not be playing this week, you know? But we have a chance and that’s what we always need, so let’s make the best of our opportunities.”

Southern Miss broke on top in the first inning with more runs than it managed in nine innings Thursday night courtesy of the long ball.

Guidry hit his fifth home run of the season the opposite way over the left-field fence.

After Hunter Slater walked, Wallner cleared the big, black wall in center field with his second home run in as many days, his 17th of the season and 52nd of his career to put the Golden Eagles up 3-0. Wallner stands one home run shy of tying Marc Maddox’s school career record.

Cole Donaldson hit a two-run, pinch-hit double in the third inning and Danny Lynch followed with a two-run bloop single to left to make it 7-0.

Wallner, who reached base in each of his five at-bats, was had the home run, two doubles and two walks. He drove in two runs and scored three times.

Guidry was the only other Golden Eagle with more than one hit. Lynch finished with two RBIs and Gabe Montenegro extended his hitting streak to 14 games.

Tennessee scored three runs in the bottom of the eighth inning — two of them on a wild pitch and a passed ball — and beat Ole Miss to continue the Rebels’ late-season slide.

Ole Miss (32-23, 15-14 Southeastern Conference) has lost six consecutive games, including the first two in this series. The regular-season finale is Saturday at 11 a.m.

It scored two runs in the top of the first inning Friday and twice battled back from one-run deficits to tie it, but gave up the big inning late.

Thomas Dillard went 4-for-5 with a double and two runs scored for Ole Miss. Cooper Johnson walked three times and scored a run.

Hatcher led off the bottom of the seventh inning with a home run to break a 2-2 tie, and the Bulldogs added three more runs in the frame to go up 6-2. In the eighth inning, Hatcher’s two-run homer was part of a five-run outburst that put the game away.

Hatcher finished 2-for-4 with four RBIs.

Tanner Allen also had a big night, going 4-for-5 with a double, triple, three RBIs and a run scored. He hit an RBI double in the seventh inning and a two-run triple in the eighth.

Mississippi State has won eight games in a row and 13 of its last 14. It will finish the regular season and go for its sixth series sweep of the year Saturday at 1 p.m. in Starkville.