Bulldogs move up in SEC with sweep 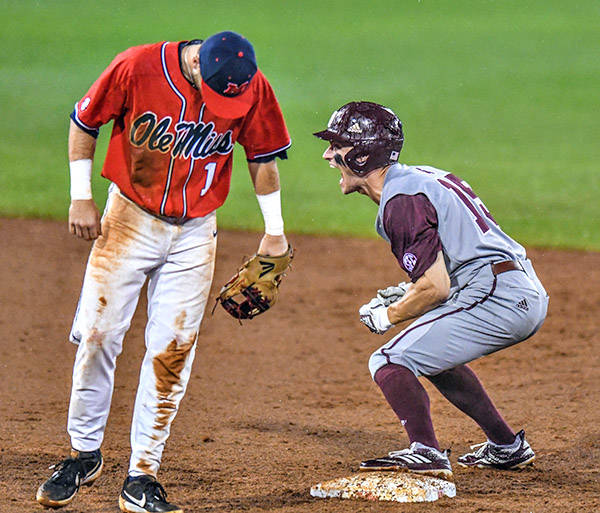 The frontrunners in the Southeastern Conference put in the work they needed to earn an extra day off.

Vanderbilt and Arkansas both won their series last weekend to clinch first-round byes in the upcoming SEC Tournament. Mississippi State and Georgia also won their series and only need one more conference win or a loss by LSU to lock down the other two byes.

The byes give the top four teams a pass into the double-elimination round of the tournament and allows them to avoid the single-elimination round next Tuesday, so getting one is a plum prize for a batch of teams chasing not just a conference title but national seeds in the NCAA Tournament as well.

Mississippi State (42-10, 18-9 SEC) swept Ole Miss (32-20, 15-12) in Oxford for the second time in three seasons. The teams entered the weekend tied for second place in the Western Division, but the Bulldogs separated from a crowded pack.

With LSU (31-21, 15-12) losing two out of three against Arkansas (39-13, 19-8), Mississippi State all but locked up one of the byes. LSU can still get a bye if it sweeps Auburn and Mississippi State is swept by South Carolina, but otherwise it’ll be the Bulldogs taking Tuesday off.

That’s not likely considering how hot the Bulldogs have been lately. They’ve won 10 of 11 since getting swept at Arkansas April 18-20 and are No. 3 in the NCAA’s RPI rankings — plenty good enough to earn a national seed in the NCAA Tournament barring a total collapse in the next two weeks.

“Except for Arkansas, we’ve played like that most of the year,” Mississippi State coach Chris Lemonis said. So I think our three days in Fayetteville were abnormal and everything else has been pretty normal. We’ve been a consistent product most of the year.”

For Ole Miss, meanwhile, the weekend was a disaster. The Rebels had a chance to play their way into the upper echelon of the league and instead slipped back toward the middle.

They were shut out 2-0 in the opener, and then had two big innings cost them in the last two games. Mississippi State scored six runs in the seventh inning on its way to an 8-5 victory on Saturday, and nine runs in the fourth inning in Sunday’s 11-5 finale.

Ole Miss will finish the regular season with a midweek game at Arkansas State on Tuesday, and then a three-game set at Tennessee (35-17, 12-15) beginning Thursday night.

“It’s a really bad weekend for us. It’s just a shame,” Ole Miss coach Mike Bianco said. “So much riding on the weekend and you’re playing your archrival and you just play awful.”