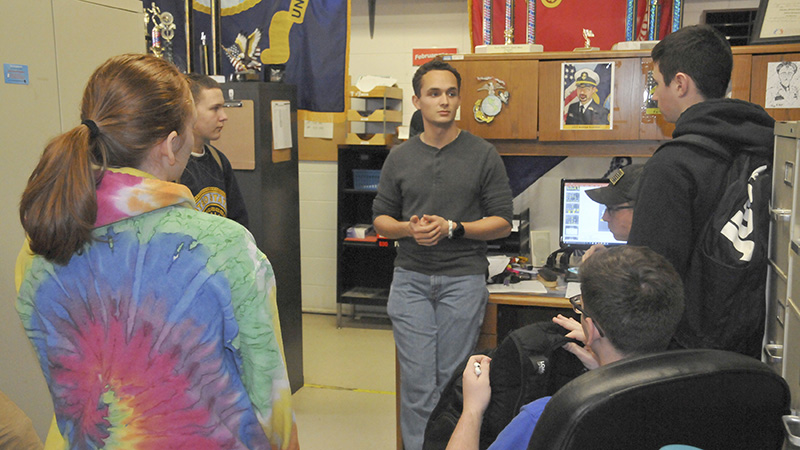 “It’s really remarkable how responsible most of them are,” said Col. Todd Ryder. “We really set the bar high for them and they beat it.”

The program is a robust one with a current roster of 88 cadets.

He said the cadets at PRC “really pour themselves into it.”

Ryder said the program is unique in that unlike other programs, it can bring out the best in a cadet

“You put a rotten kid in here, and the rottenness doesn’t survive,” he said.

Ryder said the mission of the NJROTC is to “develop citizenship.”

“The overall goal is to create responsible, contributing citizens,” he said. “As a military program, the patriotism is inseparable from what we do.”

He noted the recent controversies over standing for the American Flag.

“Here there is no controversy whatsoever,” Ryder said. “The kids willingly stand for the flag. It starts with the emphasis we give to protocol as it relates to the flag. We do the morning and evening colors ceremonies here each day.”

The colonel is a 27-year veteran of the Marine Corps, whose final station was in New Orleans. Although he had the opportunity to go to a position at the Pentagon, he decided the time was right to retire and opted to stay in the area.

“It is a requirement you have to be active military to receive your certification as a ROTC instructor, so I got that before I retired and put my resume out there,” Ryder said,

His students tell the stories of the difference the program has made in their lives.

Mark Lossett, a senior who serves as commanding officer, said he has opportunities that would probably not exist without being in the program.

“From a young age, I wanted to be in the military,” Lossett said citing family members who have served as his inspiration.

Lossett plans to major in medicine, and he says a career in the Navy will provide the benefits to make that possible.

He has already received an invitation to a special medical seminar in Boston.

“I don’t believe that opportunity would be happening without ROTC,” Lossett said. “This is an environment that helps push you and expects the most from you. It made me realize grades do matter and school does matter,” he said.

Cadet Walter Hubbard is now in his fourth year of NJROTC.

“When I was in middle school I was a bad kid, and I started to think if I could do something better in my life,” he said. “It taught me to push through on several things in high school I never thought I could do.”