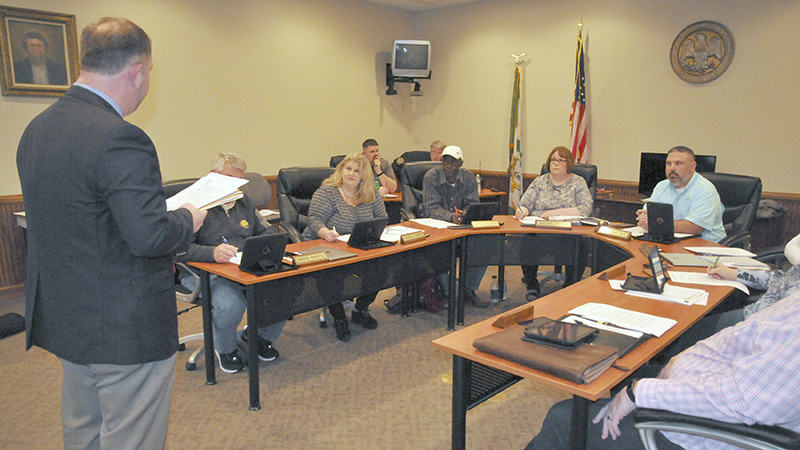 A STEP CLOSER: Attorney Troy Johnson shares the results of bidding on Poplarville’s General Obligation Bonds. Those bonds will be used to repair streets and bridges in the city. Photo by Brian Graves

Poplarville’s Board of Aldermen Tuesday accepted a bid on General Obligation Bonds to be used on various town infrastructure projects during Tuesday’s meeting.

According to Johnson, four banks submitted bids, with the low bid coming in from Bank Plus at 2.8 percent.

“That’s a pretty strong bid,” Johnson said. “You are doing something right.”

The Board gave its unanimous approval to accept the bid.

Johnson said the city could withdraw the funds, “but you will have to be able to pay it back.”

City Clerk Jane O’Neal said a construction schedule would need to be worked out with engineers to ensure spending was at a level tolerable to the budget.

The Board also gave consideration to a Mississippi Power Company proposal to replace streetlights with LED lighting along Highway 53, Larkin Smith Drive, and West North Street.

O’Neal cautioned this would add to the budget as a “continuing expense.”

Mayor Ronnie Creel said the yearly expense for Larkin Smith Drive would be $1,800.

“It sounds like a little now, and if you can’t afford it later and you have to cut later … that’s what I am trying to prevent,” O’Neal added.

The Board agreed to take the proposals under advisement.

City Attorney Manya Bryan reported her opinion concerning a previous discussion as to whether a local business would have to annually renew a curbside alcohol sales permit. She said that Hall’s Service Station would not have to annually submit an application for the permit to sell beer and light wine by curbside or drive-up service so long as he maintains a current state liquor license. Board members said that a copy of the business’ current state liquor license should be kept on record. The business still has to apply for the privilege license.

The Board also approved Tuesday, March 19 at 3:30 for a  ribbon cutting ceremony for City Park Square/Town Green.