Move to Learn visits South Side 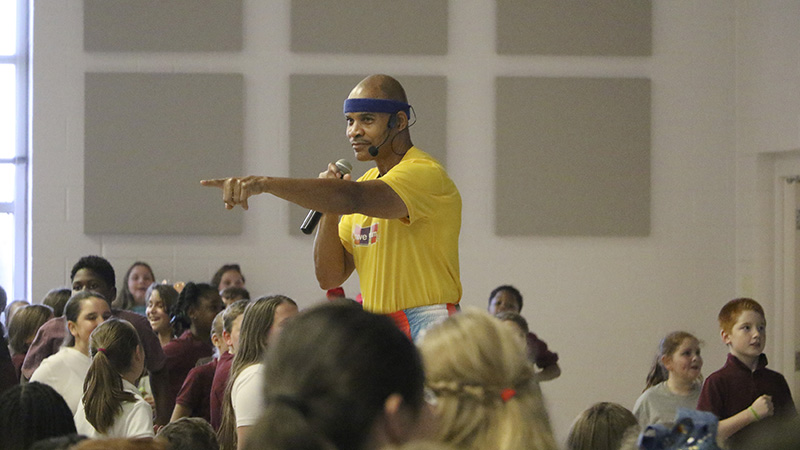 BRAIN MOTIVATION: Larry Calhoun spoke to more than 300 students at South Side Elementary in Picayune Wednesday afternoon to inspire them to learn and show them the Move to Learn Initiative. Photo by Jeremy Pittari

It may take up to three years to get him to show up at a school, but when he does he can get students moving.

Wednesday afternoon, Coach Larry Calhoun stopped in at the South Side Elementary cafetorium to give 327 students inspiration and a reason to get out of their seats during class.

Calhoun is part of the Move to Learn Initiative, a program that focuses on keeping the brains of young people active by having them do simple exercises when they feel tired or lose their focus.

During Calhoun’s presentation, he started with an inspirational story about himself. He said that at the age of 10, teachers in his community pulled him away from the negative influences of his neighborhood, inspired him to learn to write and study and ultimately played a large part in making him who he is today.

“They saw possibility in a little angry boy,” Calhoun said.

That influence led him to later seek a master’s degree and he said he’s now a published author.

His message during the presentation was that teachers can have a lasting influence on their students, even on their worst day. And he recognized the sacrifices many teachers make, such as taking money from their own pockets to ensure students have what they need to succeed.

“Teacher’s words have power to plant the seeds of greatness,” Calhoun said.

Calhoun is the host of online videos that teach children how to spark their minds by doing simple exercises in a classroom setting. He said his videos have been watched by children across the world.

After his inspirational speech, he got the children to stand up  and get their blood flowing with some of those exercises.

South Side Upper Elementary Principal Debbie Smith said schools interested in having Calhoun speak typically wait three years before he can make a visit. South Side has been on the waiting list for two years.

“We were very excited to get the call that he could come today,” Smith said during the presentation.

Students on campus have already been utilizing the Move to Learn Initiative. Smith said many classes start the day by watching a video and doing the exercises, and if the teacher feels the students need an additional break during the day, a second session is held.