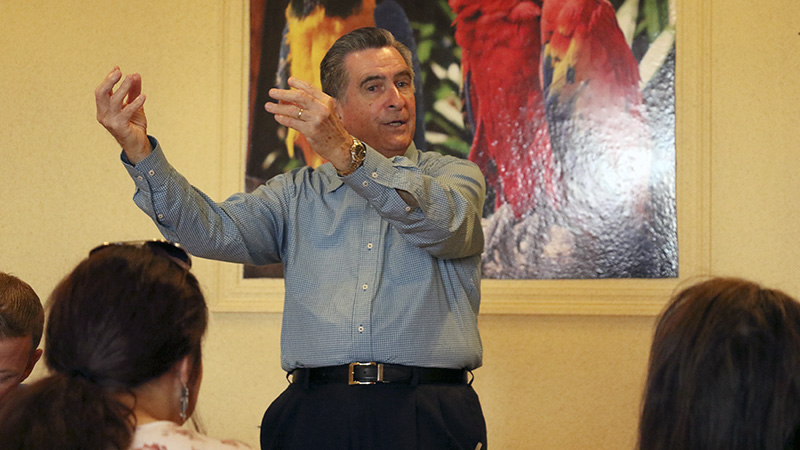 SHIELDED: A.P. Guizerix Jr. speaks to members of the Exchange Club of Picayune about the missile testing he saw while enlisted in the Navy. Photo by Jeremy Pittari

Pearl River County resident A.P. Guizerix Jr., is not worried about the tension the nation feels concerning the threat of a missile attack from other nations.

That was the message he shared with members of the Exchange Club of Picayune this week during a special presentation.

He has that cool demeanor because he is a retired Navy captain who saw some of the first tests of anti-ballistic missiles, which took place back in the late 1970s.

Missiles of various types have been used for decades for various purposes, many of which are very accurate. Guizerix said that some of the tests he saw involved using a missile to hit a target no bigger than a barrel.

Just recently, President Donald Trump used nearly 60 missiles to destroy an air force base in Syria, Guizerix said. All of those weapons were fired from two naval destroyer class ships within 20 minutes. Today there are more than 80 destroyers in operation.

Guizerix brought that up to point out that there are enough anti-ballistic missiles within the United States’ possession to knock down any attack from a nation that would dare to do so.

Guizerix ended his presentation with a bit of history about the origin of our nation’s anthem, and why his patriotism for this country has led him to stop being an avid Saints fan after the team kneeled during the playing of the anthem.