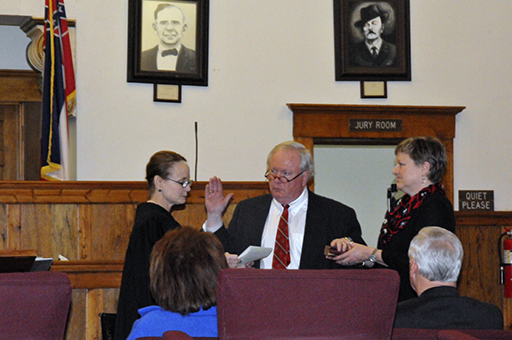 Claiborne “Buddy” McDonald was sworn in Friday as the new circuit judge for the Fifteenth Circuit Court District during his investiture ceremony among family, friends and local officials.

“This is a time when we need to go back to our basic principles. I hope I do a good job and do what I can to follow my duties and uphold the Constitution,” McDonald said after taking the oath of office. “I plan to make sure the law is equally enforced on all people.”

The ceremony, held at the Pearl River County Courthouse in Poplarville, brought the community together to witness McDonald as he joins Prentiss Harrell and Anthony Mozingo as the third circuit court judge in District 15, which covers Jefferson Davis, Lamar, Lawrence, Marion and Pearl River counties. McDonald was elected without opposition as the third circuit judge during the November 2015 election.

The new judgeship was added as a result of House Bill 703, which calls for the creation of four new circuit judgeships and three new chancery judgeships in order to comply with the constitutional mandate to redistrict the trial courts, according to the Mississippi State Legislature’s website.

McDonald said a new judgeship was added in District 15 due to the large amount of caseloads per judge, which surpassed other districts statewide.

According to a document from the Mississippi Circuit Courts, District 15 had 1,589 caseloads per judge, the highest amount of caseloads within a district, before the new judgeship was added.

McDonald hopes that by splitting the caseloads, it’ll positively benefit the district.

“Dividing caseloads up should make things move quicker,” he said.

As circuit judge, McDonald will serve the counties within District 15, but said he will spend much of his time in Pearl River County.

During the ceremony, court officials spoke about how McDonald brings a lot to the table based on his experience and achievements.

The Honorable Virginia Carter Carlton, associate judge of the Mississippi Court of Appeals, swore in McDonald. She said McDonald’s life has prepared him for this moment.

“I can’t imagine anyone more qualified for this. Buddy’s life stands for commitment to duty and love of the Constitution,” Carlton said.

He’s a graduate from Mississippi State University and the University of Alabama School of Law.

Carlton said McDonald is not only accomplished, but also charitable, contributing much of his time to community service projects. McDonald also served in the United States Army Reserve and National Guard for nearly 10 years.

Also during the ceremony, guests were treated with musical performances from violinist Marlana Wright and piper Matthew Beall.

“It’s going to be his job, as well as the other judges, to ensure your rights as citizens under the Constitution are upheld,” Randolph said. “The rights of the Constitution have to be preserved and you need to make the right non-biased decisions.”

Also during the ceremony, Rev. John Noone, with St. Charles Borromeo Catholic Church, led the invocation and Rev. Larry Head, with the Oak Hill United Pentecostal Church, performed the benediction.

As his first act as circuit judge, McDonald administered the oath of office for several officials, including Sheriff David Allison.