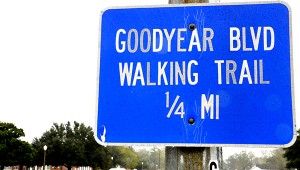 Jesse Wright | Picayune Item
walking in the rain: Although the city and county have some walking areas and playing fields, Pearl River County as a whole has poorer health scores than its neighboring counties. However, recent bans on smoking in public may improve those scores.

If getting in shape is a goal for the new year, chances are, residents may be better off next door in Hancock County.

This is because, according to an annual survey of Mississippi counties, Hancock County citizens have on average five times better health outcomes than citizens in Pearl River County.

The report was issued in November by the Robert Wood Johnson Foundation, and the annual Health Rankings Report is meant to spur states, counties and cities to improve living conditions. Besides the rankings, the foundation also awards up to 10 communities across the nation a $25,000 prize if they win an annual Culture of Health Prize.

To be clear, researchers understand good health doesn’t come from any one source.

“We still look at the state level, but the county health rankings can vary so much by county, and it’s not often a single cause but a web of factors,” said Elizabeth Pollock, a co-author of the report.

Factors such as wages as well as strong families can be just as important as more traditional health influencers like access to healthcare and diet.

According to the study, researchers “… look at a variety of measures that affect the future health of communities, such as high school graduation rates, access to healthy foods, rates of smoking, obesity, and teen births. Communities use the Rankings to identify and garner support for local health improvement initiatives among government agencies, healthcare providers, community organizations, business leaders, policy makers, and the public.”

In short, communities that can offer good jobs, good schools and safe neighborhoods, have strong families and access to good foods and healthcare tend to be better off.

“The rankings show us where we live really matters to our health,” Pollock said.

The trick is getting there.

Pearl River County Administrator Adrian Lumpkin said there is no county-wide smoking ban, as there is in Poplarville and Picayune, but the county does help support other health initiatives, including walking trails and baseball fields that encourage healthy lifestyles and family participation.

“I know when you drive through Carriere and McNeill, you see a lot of people using (the walking trails),” he said.

According to the study, health outcomes reflect the quality of life for residents in the county. That’s not the only statistic the study reflects, however. Researchers also ranked each county by health factors, including, “health behaviors, clinical care, social and economic factors, and the physical environment,” according to the study.

Pollock said the numbers aren’t meant to shame counties and the communities within those counties, but to spur them to action.

“Over 2,300 deaths (across the state) could be avoided if residents have a fair chance to be healthy,” she said.

It should be noted that Pearl River County might not rank as low as it does if the data were more current. Most of the study is based on data that comes from 2012 and 2011, before Picayune and Poplarville enacted smoking bans and before the community college instituted a campus-wide tobacco ban.

The county will also likely improve its ranking when the city of Picayune completes its expected walking path around Crosby Commons next year.

Still, if the county would like to see its ranking improve further, Pollock recommends checking out the foundation’s website, www.countyhealthrankings.org . On it, communities can find ways to improve the health outcomes of residents and they can get advice from community coaches.