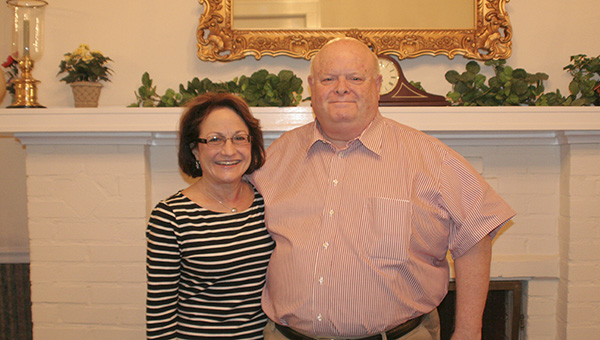 A HEART FOR VETERANS: From left, McDonald Funeral Home owners Ann and Steve McDonald are collecting cool weather clothing for veterans through Nov. 11. Donations can be dropped off at the funeral home, located at 401 West Canal St.
Photo by Cassandra Favre

The winter season is approaching and many people will soon be purchasing warmer clothing for the upcoming chilly temperatures.
However, for some retired veterans, that may not be an option, which is why, for the second year in a row, the staff at McDonald Funeral Home will be collecting “Sweaters for Veterans.”
Funeral Director Steve McDonald said his funeral home is a member of the Veterans and Family Memorial Care organization, which started the program several years ago. According to the group’s literature, the Veterans and Family Memorial Care provide service for veterans’ funerals, cremations and burials.
Last year, McDonald said they didn’t collect as many items as they would have liked to, but they are hoping, with an earlier start, to see more items donated.
Members of the McDonald family are not strangers to service to country. McDonald’s father and uncle served in World War II, another uncle served in the Korean conflict and McDonald and his brother are veterans of the National Guard.
“We have a strong belief in helping veterans and this organization offers a way for us to show and do that,” McDonald said. “We also have a staff member who provides the family of a deceased veteran with information about veterans’ benefits.”
They will be collecting clothing until Nov. 11, he said. They ask that the items be either new or slightly used and can be for men and women.
Items needed include, sweaters, coats, hats and gloves, McDonald said.
A number of local retired veterans receive medical services from the Veterans Administration in Biloxi, McDonald. This is just another area in which they assist veterans.
“Some of them don’t have good living conditions and the VA offers them good clothes for the colder months,” McDonald.
In addition to donating to “Sweaters for Veterans,” people can also donate their used cellphones year round, McDonald said. They are collected for the “Cell Phones for Soldiers” program, McDonald said. The phones are sent to active duty soldiers, which provides them the opportunity to call home.
“We just take the cell phones,” McDonald said. “We don’t need the power cord, SIM card or covers.”
Clothing donations and used cell phones may be dropped off at the funeral home, located at 401 West Canal St., Monday through Friday from 8 a.m. to 5 p.m.
Learn more about Veterans and Memorial Care at www.veteransfuneralhomes.com and McDonald Funeral Home at www.mcdonaldfh.com and Facebook.

Festival successful, ends with a bang

Pictured: Vince Vance’s band, the Valiants, tear it up Saturday night. Some Picayune residents got in on the action and... read more