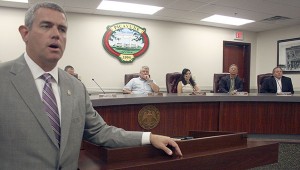 IDEAS TOUR: Speaker of the House Phillip Gunn, pictured at left, held a meeting to collect ideas from local residents that could potentially be turned into law.
Photo by Jeremy Pittari

Speaker of the House Phillip Gunn passed through Picayune, accompanied by local legislators.

The premise of the event, called Mississippi Solutions — An Ideas Tour, was to gather public input concerning how the state legislature should be operating and if the community had ideas on new laws.

“Many of you would have to take a day off work to see your legislator,” Gunn said before the meeting kicked off. “That is not convenient for citizens.”

Ideas presented to the local lawmakers ranged from better education to requiring voters to register under their preferred party.

Fr. Jonathan Filkins addressed the lawmakers about the need to promote education and more family time within the state. He suggested an initiative called Take an Hour Out, which would allow families to interact with each other by taking them away from their electronic devices.

Filkins’ second idea revolved around taking young people who appear to be on track for a life of crime and scaring them straight by showing them what jail time is really like. He said he has already spoken with Sheriff David Allison, and would like the state’s support on initiating such a program.

Sue Suter with United Way of South Mississippi suggested the lawmakers continue and build upon their early childhood education program support. She also wanted to see the state initiate a calling program, called 211, that would connect people with the services they need, such as food, counseling or shelter.

Local resident Russell Foster suggested the state implement more days into each school year; instead of 180 days he suggested increasing it to 200 days so children will receive more class instruction.

Cindy Dyle with the Mississippi and Louisiana ALS Association asked them to consider the needs of those who need respite care, which provides temporary relief to families caring for the severely disabled. Her husband was diagnosed with ALS in 2005.

“He just lays there,” Dyle said. “He’s trapped in his own body.”

Former Board of Supervisors member and local businessman Hudson Holiday asked the legislators to consider teacher training to help identify children suffering from dyslexia. He said his granddaughter missed out on crucial education opportunities due to a late diagnosis of the disability.

Pearl River County Library System Director Carol Phares asked the representatives to fund installation of fiber connections to provide higher speed Internet at local libraries. She said many citizens utilize the library for class project research and to find jobs. She said the $2 million statewide investment would pay for itself in the economic boom resulting from the jobs obtained.

Animal cruelty laws were also addressed. One county resident said she continuously deals with incidents of animal cruelty, and would like to see the penalties increased to felonies. She said research has shown that people who abuse animals are just as likely to abuse humans.

University of Southern Mississippi student Jeremiah Boddy attended the meeting to request the legislature consider rescinding or minimizing restrictions recently placed on cold medications containing pseudoephedrine.  He said he suffers from allergies and the current bans restrict his access to the medication that helps him the most.

Boddy also addressed the panel on the need to require party registration during elections. As an example, he used the recent Hinds County election where Democrats voted in a Republican primary.

The ideas will be taken into consideration and the person who submitted the idea that leads to new or changed law will be recognized for their contribution, Gunn said.