Do spiders “bug” you? 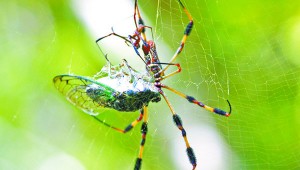 FEEDING: A male and female golden orb weaver spider feed on a cicada. These spiders are also commonly found on the Arboretum grounds.
Photo by Jeremy Pittari

Over the past few weeks, while preparing for the recent trail run conducted by the local Teen Challenge group, we encountered quite a few spiders on our travels through the grounds in the carts. Spiders tend to increase in numbers in the fall months.

But by the time I usually get out on the site, grounds manager Terry Johnson has thankfully already cleared away the previous night’s webs on his morning rounds.

During our cart rides we encountered quite a few of the small spiny orb weaver spiders, which we caught on our “spider stick”, which is a very handy tool (a branch) that we use to gather up any wayward spiders. And what odd-shaped spiders these are, with their hard, flattened bodies. The ones we find are either yellow or white, with black spines sticking out from them. Their legs appear very spindly in proportion to their bulk.

Speaking of “spiders”, last Wednesday, a group of Harrison County Master Gardeners were at the Arboretum for a fern transplanting project.

As we crossed over one of the bridges near the Visitor Center, we saw that our water spider orchids (Habenaria repens) were blooming in the stream channel in our Slough Exhibit. Unlike most of our other orchids, spring bloomers found in our bog and wet savannas, the orchid flowers in the late summer and early fall.

Its yellow-green blooms are quite inconspicuous, and it blends in with the other aquatic species. One has to really look closely to pick out this plant from its neighbors.

Water spider orchid is fairly common in the Southeast, in the acidic, tannin-rich waters of the Piney Woods.

Its tall stalks are covered with dozens of light green blooms that look like tiny spiders. The blooms produce a sweet scent at night, attracting moths that pollinate the flowers.

When I first became acquainted with the huge golden orb weaver spiders along our pathways, I thought the spider had received this name because they are yellow in color. But it is the web that has a beautiful gold color.

Enter the “golden orb weaver spider” and “cloth” into an Internet image search engine and you will be astounded to see that people have woven garments of spider silk.

While these spiders can be fun to watch, two spiders that really “bug” me are black widows and brown recluses.The brown recluse can be found living inside your house as well as outside, in locations such as under furniture, in attics, and in old shoes. Yikes!

The brown recluse has a “fiddle” shaped mark on the back of its cephlothorax (the “front” section of the spider). Interestingly, brown recluse spiders only have six eyes, while most other spiders have eight eyes. I’m not sure I’d want to get that close to find this out.

Female black widow spiders have the characteristic red hourglass on the underside of their abdomen. These shiny black spiders are typically found outdoors, for example, inside stacks of nursery pots, firewood piles, or in crawlspaces.

Last year, we found a black widow spider had taken up residence in a traffic cone on our loop driveway. This made me think twice about putting my index finger down inside the top opening the next time I needed to move the cone.

Extension Publication No. 2154, available at www.MSUcares.com, contains photographs of the spiders, and detailed information on their identification, their habitats, and how to control them. Bites from either of these spiders should be treated by a physician.

At our Bugfest event this weekend, we will be asking the public not to collect spiders, which are beneficial predators. In addition, spiders have very fragile bodies and are not able to be traditionally mounted like other insects.

Bugfest will take place on Friday and Saturday, September 26 and 27. Participants may check out collecting nets and jars for use on-site. Collecting containers, for those who prefer to catch and release insects, will also be available. On Friday, the site will open at 9:00 a.m. to pre-registered school groups, until around 2:00 p.m. The fun will begin around 6 p.m. and continue until around 10:00 p.m. that evening, which will include children’s crafts and night collecting activities. On Saturday, the festival is open from 10:00 a.m. to 3:00 p.m. and the Audubon Institute Bugmobile will give several presentations, with the first at 1:00 p.m. A detailed schedule is available on the Crosby Arboretum website’s program calendar at www.crosbyarboretum.msstate.edu.  Call 601-799-2311 for more information. The Arboretum is open Wednesday through Sunday from 9 a.m. to 5 p.m. and located in Picayune, off I-59, Exit 4, at 370 Ridge Road (south of Walmart and adjacent to I-59).

FOR FURTHER EXPLORATION: Visit the MSU Extension Service website, at www.MSUcares.com and enter keywords such as “insect pests” into the search engine to read more about bothersome insects, or search for the specific insect such as fire ants, mosquitos, or bed bugs.